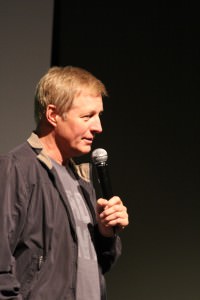 The Bruce Boxleitner panel on Babylon 5 is available in both MP4 (video) and MP3 (audio only) versions at the bottom of this page.

On Friday when I was interviewing Cindy Morgan (Yori from Tron), Bruce arrived and interview-bombed Cindy.  This was absolutely hilarious.  Afterwards I interviewed Bruce – which was great – but my one disappointment was not having more time to talk about Babylon 5.  Babylon 5 is probably my all-time favourite TV show, or at least in the top 5 along with Firefly, Buffy and Angel.  I couldn’t miss this panel with Bruce Boxleitner on Babylon 5, which could only have been improved with Mira Furlan here.  Bruce impersonated Mira at one stage; I wish I could see Mira watch that segment then pay Bruce out 🙂

During this panel Bruce talked about the men from Babylon 5 who’ve died and the near-misses other people have had.  Bruce explained why Mira Furlan didn’t make it (next time!).  When asked about the storyline involving Sheridan’s son, Bruce couldn’t remember what happened but he explained that he thought the series shouldn’t have ended when it did.

Note: there are books, folks!

The Centauri storyline is effectively wrapped up in the Legions of Fire trilogy by Peter David: The Long Night of Centauri Prime, Armies of Light and Dark and Out of the Darkness.

The Psi Corps trilogy by J. Gregory Keyes tells more of the story of the rise of Psi Corps and Bester: Dark Genesis: Birth of the Psi Corps, Deadly Relations: Bester Ascendant, Final Reckoning: The Fate of Bester.

The Techno-mage trilogy The Passing of the Techno-Mages by Jeanne Cavelos is great: Casting Shadows, Summoning Light and Invoking Darkness.

Jeanne Cavelos has also written some excellent stand-alone B5 novels, and other authors have written some enjoyable books to add to this expanded universe.  I don’t have all the B5 books but I have a small collection – I’d love to see ALL the books re-released.  [pointed look at J. Michael Straczynski]