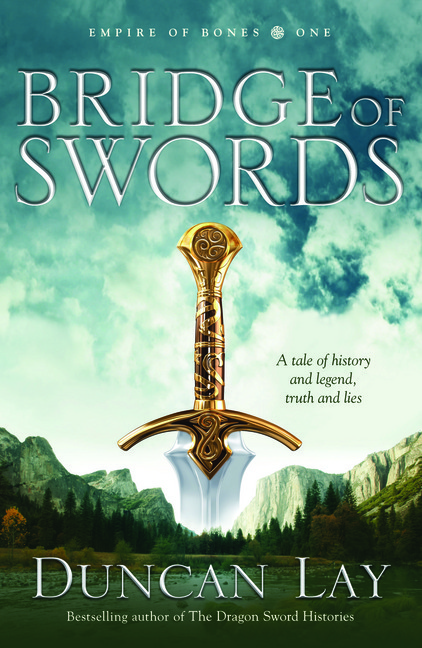 Bridge of Swords is the first book in a planned trilogy, Empire of Bones. Sendatsu is a high status elf, son of a member of the Council. His life is a life of privilege but also of sorrow. His life now revolves around his children. After discovering an ancient scroll, Sendatsu becomes entangled in a power struggle between the Council and the Magic Weavers. Fearing for his life, he flees through the magic barrier into the human world. There he meets a bard, Huw, and a dancer, Rhiannon, who beg him for help to save Huw’s people from invasion. Sendatsu is a skilled fighter, unmatched among the humans. However, he is not interested in being a hero – he simply wants to get home to his children. The lives of three become more and more entwined, however, and Sendatsu finds himself caught up in the events around him.

This is a longish book but it is very hard to put down. The characters, especially the three protagonists, are explored and developed really nicely. When I started the book, I wasn’t sure that I really liked Sendatsu or Huw, but they both grew on me throughout the book. At first, Sendatsu comes across as weak, unwilling to stand up to his father but also unwilling to make his life useful by working for him. In his dealings with the other elves, and his early dealings with the humans, I kept wanting to tell him to man up, and then feeling bad because that is essentially what his abusive father was saying too. As the book progresses, however, Sendatsu is forced into situations where he must act, and he grows into himself. Huw, too, has always been taunted as being weak, and he too must find his strength.

The book explores some complex and powerful issues. The role of fatherhood is one. All three protagonists have been shaped, for good or bad, by their fathers, and then by their absence. Sendatsu’s fatherhood is shown to be a big part of who he is too. Then there is the theme of deceit. Centuries old deceit by the elves and lies told to each other by the protagonists both play a big part in the story. Deceit is shown to be damaging and destructive, forcing people to act in ways they don’t want to and shouldn’t. Heroism is also explored – what it takes to be a hero, and what being a hero really means.

I did find myself getting frustrated at certain parts of Bridge of Swords, mostly with how certain characters were behaving. As I finished the book, however, I found that I had quite enjoyed it. I recommend it to people who like epic fantasy with very real, very human characters. However, make sure that you pick it up when you have a lot of time to sit and read – it is hard to put down. Also, it finishes on a big cliff hanger, so make sure you can get hold of the next book, Valley of Shields, as you finish this one.