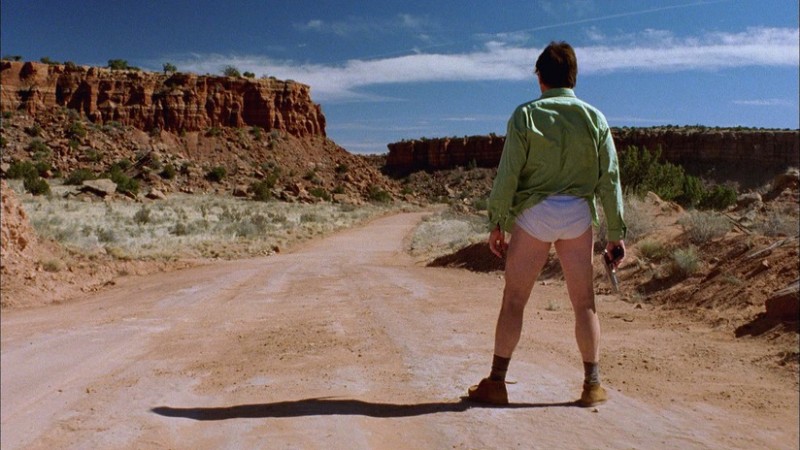 Walter White (Cranston) is a high school chemistry teacher who has discovered he has cancer. When Walt goes on a ride-along with his DEA brother-in-law, he sees the money that can be made and an escaping meth cook, ex-student Jesse Pinkman (Paul). Walt approaches Jesse and blackmails him into letting Walt be his new meth cooking partner. With a few bumps along the road, both literal and figurative, Jesse and Walt embark on their career together.

I honestly never thought a television series about drugs would be my bag, yet here we are. I am thoroughly enjoying the adventures of Walt and Jesse at this stage.

Walt is a man who turns his own world upside down in the hopes of providing for his family after his death. It is a drastically different role than the one I was most familiar with Bryan Cranston for — the clueless father in Malcolm in the Middle. Cranston has done something spectacular with this role and has made it completely his own.

Walt’s wife Skylar (Gunn) is the most annoying television wife since Lori Grimes died in The Walking Dead. She embodies so many negative wife stereotypes — she’s nagging, controlling, selfish. Hopefully the character becomes vastly more likeable. If not, she is likely to go on my ‘I hope they’re eaten by a zombie even though there are no zombies in this show’ list.

A lot of things I have read say that Breaking Bad glorifies drugs and drug dealing. From everything I have seen so far, I do not believe that to be the case.

[Yeah, what is that? Critics think people actually go “I want to be murdered and turned into slushie with acid or shot and dismembered so I’ll get into ice?” I have to wonder if the critics of the show are sick and twisted puppies to think that way. — Editor]

I wouldn’t have wanted anything to do with the drug trade in the first place, but if I did Breaking Bad would have beaten it out of me.

Overall, Breaking Bad is a witty, often laugh out loud funny look at the a life turned upside down by illness in a way no-one could ever have imagined. Definitely worth a look. The first season is only seven episodes long too so it’s a great toe-dip before taking the plunge into season two.

[My favourite aspect of the show is watching Walter as everyman, there-but-for-the-grace-of-god/God/gods/goddesses go I; in a later season when he [spoiler deleted] it got me straight in the feels. I was like, OMG I totally see this dude as a Macbeth-type who started normal but got hooked into a system and ended up a different person. And later when he [serious spoiler from third season deleted] I thought yeah, totally. He’s on this path and… [raves about show]. — Editor]

‘I got two dudes that turned into raspberry slushy then flushed down my toilet. I can’t even take a proper dump in there. I mean, the whole damn house has got to be haunted by now.’