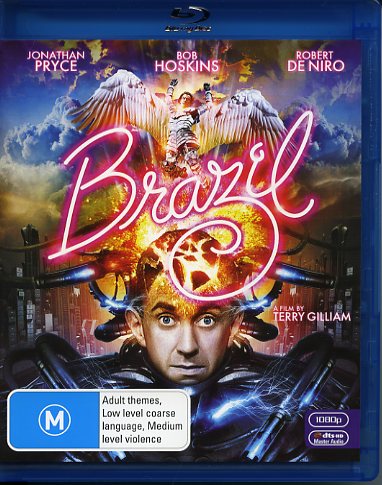 Brazil starts ‘Somewhere in the 20th century’ floating in the clouds until the camera descends to a TV shop showing the news before it gets blown up. We follow the camera at it explores this Brave New World closely associated with 1984.

A man dreams of flying like Icarus, dressed in plate mail with Bowie-esque makeup. He dreams of a girl, of meeting her, of flying with her…

A harried civil servant beats an insect to a pulp; the insect promptly falls into a teletype computer interface, changing an arrest warrant from Tuttle to Buttle. Secret service–army types descend through a hole they cut in the floor above, capturing the very surprised Mr Buttle (Brian Miller) before demanding signatures from Mrs Buttle (Sheila Reid) — she’s given a receipt for her husband as they escort him away, body-hooded and manacled.

Mr Buttle is sent to Information Retrieval where he’s told to cooperate because he’s being charged by the government for the cost of extracting information from him. This is a running joke throughout Brazil.

Records manager Mr Kurtzmann (Ian Holm; this has to be a reference to Heart of Darkness) is in a panic because Mr Buttle was overcharged. Due to Mr Buttle’s death, this catastrophe, this cheque, cannot be returned. Mr Kurtzmann’s right hand man, Sam Lowry (Jonathan Pryce — also the dreamer) attempts to return the cheque unsuccessfully then takes it in person to Mrs Buttle who hasn’t even been told of her husband’s death.

While Lowry talks to Mrs Buttle, the upstairs neighbour, Jill Layton (Kim Greist), pokes her head in the hole to ask if the Buttles are okay. Lowry recognises Jill as the woman of his dreams so he pursues her, only to discover the government car he used for the trip is burning while Jill drives off in a rig.

This is just the set up. It’s complicated.

Brazil is a darkly comical version of 1984 with a fabulous cast and sumptuous visuals. Although the sub-plot is limited to Lowry’s dreams, I was thoroughly engaged for about the first half of the movie. Later Lowry’s dreams seem to become ‘real’ while still being metaphors. The whole movie descends into a surreal mind-fuck where I was left wondering WTF was actually going on.

When Lowry went to work for Information Retrieval the camera lens changed; it wasn’t quite a fish-eye lens but it wasn’t a normal lens either. Chromatic aberrations (blue edges) were added to give this sequence a dream-like feel. At this point Brazil really lost me. I couldn’t tell what was real and what was a dream plus the visuals are too much like looking sideways through my glasses (i.e. not through the absolute center; thick lenses give chromatic aberrations. Also, when glasses aren’t calibrated or fitted correctly, distortions can occur).

Brazil has 8 stars on IMDB; I credit this to the hordes of Monty Python fans and Brazil‘s descent into Art House–style surrealism. While I like some Monty Python, I prefer movies like Suckerpunch over Brazil, because Suckerpunch does a lot of the same things while being consistent within its world-building. I’m not saying Suckerpunch is fabulous (apart from the visuals). I am saying that if you didn’t like the plot for Suckerpunch then Brazil is probably not for you.

Here’s the kicker. Brazil is an iconic movie that has influenced much of what has followed. There’s a shootout in Information Retrieval’s foyer that reminds me of the Matrix (1999) foyer shootout. Information Retrieval heavily influenced Harry Potter‘s Ministry of Magic (2010) under the bad guys’ influence. A samurai wears motherboard components for armor. Some of the dream-sequence creatures seem straight out of Labyrinth (1986). Brazil leads the way for comedic beauty regime spoofs in movies like in Mirror, Mirror (2012). Robert De Niro was very Stardust (2007) in his performance as Harry Tuttle; I almost expected him to dance across the screen wearing a pink tutu. There are so many references by Brazil and to Brazil in cinematic history that, if you’re a science fiction/fantasy fan or a cinema buff, you really need to see this movie.