The house was peaceful, I hadn’t seen or heard from Smokey for hours. I glanced around, listening intently. I quietly picked up the ‘items received’ pile, putting it on the cat scratching post. Extracting my camera from its bag, I reached up to pluck Edgar Allan Purr from the top shelf of the kitchen dresser. Walking over to the books, I place Edgar on the pile before readying the camera.

A chirrup sounds, half-way between a purr and a meow. Smokey, vigilant as ever, emerges from concealment to leap between the books and camera. I sigh. 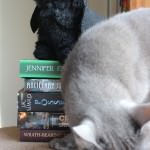 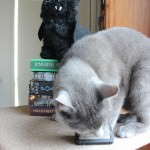 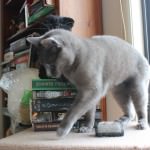 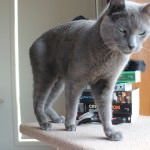 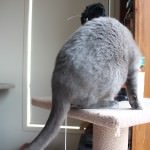 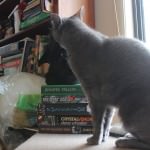 This is the third installment of the Riftrunner series. I’ve enjoyed Undivided and The Dark

“Ren of the Undivided and his half-Faerie companion Trása must find a way to stop the Matrachai, who want to eliminate every magical race in existence. Only the Undivided hold the key to stopping them, and even the Faerie Brethren have turned to Ren for assistance. With the help of the Pete and Logan Doherty, the human twins stranded with them, Ren must find a way to save them all, especially his twin brother Darragh. REUNION is the third book in the fabulous Rift Runners epic fantasy series, following on from THE UNDIVIDED and THE DARK DIVIDE, and switches through time portals between the contemporary world and a Celtic Druidic Britain.”

“Inventive and intelligent space opera for fans of Iain M. Banks – the story of a warship trapped in a human body, and her search for revenge.

“They made me kill thousands, but I only have one target now. The Radch are conquerors to be feared – resist and they’ll turn you into a ‘corpse soldier’ – one of an army of dead prisoners animated by a warship’s AI mind. Whole planets are conquered by their own people. The colossal warship called The Justice of Toren has been destroyed – but one ship-possessed soldier has escaped the devastation. Used to controlling thousands of hands, thousands of mouths, The Justice now has only two hands, and one mouth with which to tell her tale. But one fragile, human body might just be enough to take revenge against those who destroyed her.”

This is part of an ongoing series Evie Kendal loves so she’s squeeing over this arrival.

“Jim Heron, disgruntled fallen angel, thinks that he finally has a leg up against Devinia, a devil’s minion, in their fight over seven souls to end the war against good and evil. This is because Jim knows exactly which earthly soul he needs to save: a distant single father of a 13-year-old son. Luckily, Jim thinks that he can leverage the power of love, because this man is in love with a careful woman previously burnt by lust. So instead, Jim focuses his attentions on Sissy, the young soul he saved from Devinia’s clutches, who is now transitioning to her life as an angel.

“But things are more complicated than they seem, because someone else is in love with that careful woman – the twin of the man whose soul needs saving. And unfortunately, this twin is the better contender for romance – he’s a good-hearted sensitive musician. Torn between gentle support and steamy passion, will this woman make the choice that brings a brooding, broken soul to redemption? Or will that soul be doomed to endure the most hellish possession?”

Based on the cover, this looks like a space opera. It’s the second in a series. HarperVoyager says:

“A superb space adventure from a fresh new voice. This is the second book in the Fury of Aces series and follows on from the action-packed BURNT ICE.

“In our future worlds the Administration rules the Sphere of Humankind, the Games Board sanctions and funds wars and conflicts, and the Haulers’ Collective roams the space routes like the caravanners of old.

Another second book in a series, Wrath-bearing Tree is part two of a Tournament of Shadows.

“The masked powers of Fate and Chaos are killing gods in the land of Kaen, facing the Wardlands across the Narrow Sea. Vocates Aloe Oaij and Morlock Ambrosius go into the Unguarded Lands, on a mission to find the reasons for the godslaying, and to avert any threat to the lands the Graith of Guardians has sworn to protect.

“After crash-landing on the hostile coast of Kaen, they will face vengeful frightened gods, a calmly murderous dragon, a demon called Andhrakhar, and a bitter old necromancer named Merlin Ambrosius.

“Amid these dangers they will find that they can trust no one but themselves—and each other.”

FYI, the first time I read the name ‘Merlin Ambrosius’ was in Mary Stewart’s Crystal Cave trilogy (it was a trilogy when I read it ). Merlin Ambrosius is King Arthur’s Merlin.