Devon is one in a family of book eaters. They might look human at first glance but they have “book teeth” for eating books not food. Living in relative seclusion, the family’s strict gender divide ensures Devon is ignorant and vulnerable. The book eaters learn by eating books but the family keeps Devon on a strict diet of fairy tales. Occasionally she steals a book to – shock, horror – READ it! But her illicit reading and eating still doesn’t prepare her for adulthood.

Dean’s worldbuilding is excellent. She developed a supernatural species who live in seclusion but are not entirely separate from the human world. We learn about this world through the eyes of a girl who becomes a woman as part of this segregated society. But her family also kept her relatively ignorant. And, when she runs away, living amongst humans is challenging because of her ignorance as well as her supernatural nature.

Book eaters’ society is rigid and rigidly enforced. In order to ensure breeding lines, women marry twice and are released from their marriages once the shared progeny – one child – is weaned at age 3. Then the husbands send the women back to their family of origin to live the remainder of their days in relative seclusion without agency.

Devon fights this, tooth and nail after the birth of her first child. But she loses.

Then, after the birth of her second child, the child’s father rejects the child for a perceived disability: the child is a mind eater instead of a book eater. I’m not sure if Dean actually says that being a mind eater is a disability – I devoured this book and didn’t take notes – but parental and societal rejection stings. As a disabled person I felt both seen and categorized as a monster. This is the only aspect of the Book Eaters that left an unpleasant taste.

There is medicine and a career path for mind eaters, which is more than can be said for book eater women.

However, something goes horribly wrong. Devon flees with her son to live among humans while searching for a permanent solution. And living a horror-filled life.

Devon’s experience with men is far from positive apart from the man who becomes her best friend, but he’s asexual. She discovers an attraction to women. There are hints that same sex attraction exists, is possibly accepted in society to a degree as long as it doesn’t interfere with breeding. Dean also hints that women past their breeding years possibly turn to other women although that’s tricky because society segregates them, practically imprisoning them in their fathers’ homes.

The Book Eaters is a wildly imaginative, feminist, kick-ass dark fantasy novel with a perfect combination of morally grey characters, rigid social rules and emancipation. At the very core of the story is a mother who aids her child’s murders necessary to his sustenance. Sunyi Dean made me wonder where my limits are, what I would have done in Devon’s shoes.

I’m unsure if Dean explicitly stated that being a mind eater was a disability although book eater society definitely shunned their different offspring. The problem for me is that mind eaters who are unmedicated and are actually eating human minds are monstrous. Do we turn this on its head by categorizing mind eaters as billionaires? Problem is, billionaires are lionized not condemned. Unless you refer to, for example, Will Anderson’s new book I am not fine, thanks, where Anderson suggests billionaires on Forbes’ list ought to be assigned numbers of the world’s poor children who starved to death under their watch. I’d love to attend a book club that discussed both The Book Eaters and Anderson’s new book simultaneously!

Although generally I prefer stand alone stories, Sunyi Dean’s open ended conclusion served both to satisfy and to inspire thirst for a sequel. I highly recommend.

Although a longer read, if you enjoyed The Book Eaters for at least some of the same reasons I did, then I highly recommend Her Majesty’s Royal Coven, which I’ve reviewed here. 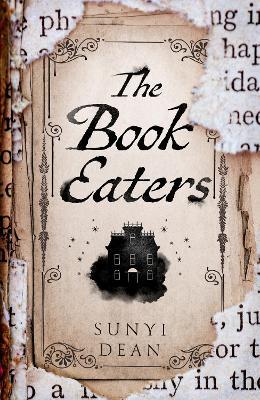