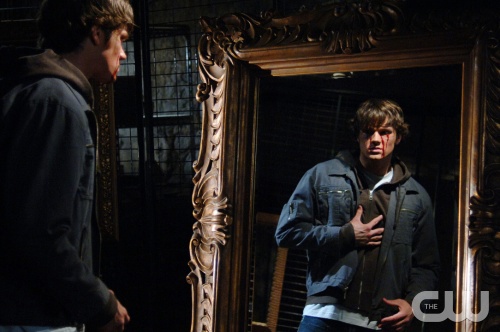 A commentary from the peanut gallery by CJ Dee, Nalini Haynes and Rebecca Fleming

CJ: Oo this is my favourite episode.

A young girl is having a slumber party with a couple of friends. She is dared to Bloody Mary. This involves going into a dark bathroom with only a candle, looking into the mirror and repeating the phrase ‘bloody Mary’ three times. Urban legends state that this will summon Bloody Mary to scratch out the eyes of the speaker. The girl follows through and is scared by her friends. Her father is not so lucky.

R: Kinda looks like The Ring but then I s’pose all those things look the same.

Dean and Sam head to Toledo, Ohio to investigate the death of a seemingly healthy man whose eyeballs exploded.

C: I like how these things don’t happen in NY or LA.

N: The houses are more normal instead of 2 or 3 storey mansions.

R: Yeah. In other shows normal people don’t have crimes or things happen to them.

The dynamic DNA duo arrive at the morgue to look at the body.

Dean is pleased that they manage to dupe the poor attendant into showing them despite his reluctance.

C: He’s far too happy about that.

The brothers attend the man’s funeral, posing as work acquaintances. They give the man’s eldest daughter and her two friends their phone number. She seems unimpressed.

C: I don’t suppose you’d want an open casket after that.

R: You’d think they’d wait until after the funeral… tact is for pussies.

N: Do they upgrade to business cards later?

C: They do. And if Dean had given her his number she wouldn’t have pulled that “What is THIS” face. Poor Sam. Stupid, stupid woman.

Only one of the girls truly buys the whole ‘Bloody Mary’ as the cause of the deaths and is on the phone to one of her girlfriends. The girlfriend taunts the believer by saying the chant while on the phone. Naturally, she is soon sans eyeballs.

R: When I hear candy man I think of Willy Wonka.

R: Or the Aqua song.

The girl whose father and now friend is still unconvinced. The believer tries to talk to her and is met with the daughter chanting ‘bloody Mary’ in the ladies’ room in which they are talking.

The believer is the one who is now being stalked by Bloody Mary. She calls in the heroes. Hero Sam unfortunately not so great with the comforting.

Girl: I feel so much worse.

The brothers take the girl to their motel room. Having discovered that Bloody Mary is hunting people who have been responsible for the death of another.

C: You can see the blue line [around Sam’s head while the brothers drive in the car]. [laughter]

They cover all reflective surfaces (because that’s how Bloody Mary kills) and leave to  destroy the source of her power. Unsurprisingly — a mirror.

N: I bet she answers her mobile phone.

Brothers pull over in the car for a D&M [Deep & Meaningful conversation for the under 30s.]

Sam insists that Dean needs to let him summon Bloody Mary as he blames himself for the death of his girlfriend, Jessica.

C: Chick Flick Moment. When Sam puts his foot down and says “We’re doing this. Please?”

Dean reluctantly agrees and they break into the antique shop currently housing Bloody Mary’s mirror. The alarm is triggered and Dean goes to hold off the police until Bloody Mary is defeated.

R: He’s probably Asian or something. [because Dean is lying about being the son of the shop owner].

Bloody Mary is subdued by the Winchesters.

The brothers: So this is really over?

C: DON’T SAY THAT! DON’T EVER SAY THAT! ARE THEY INSANE? WHY DID THEY SAY THAT?!

The brothers have saved the girl, destroyed the vengeful spirit, and ride off in the metallicar wearing far too much movie make-up.

N: [to Sam and Dean] Change your lipstick and eye shadow.

R: They shouldn’t really put makeup on guys apart from foundation because of the lights and stuff.

C: LOOK AT THAT. He has prettier lips than I do.

There’s a Supernatural wiki for those who want more.