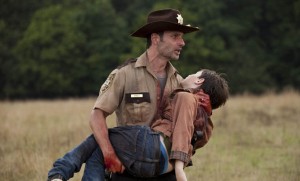 ‘Bloodletting’ begins with a flashback to Lori confiding with a friend her doubts as to whether or not she still loves Rick when Shane arrives to tell her that her husband has been shot in the line of duty.

Otis, the man who shot Carl, leads Rick and Shane to a house of survivors led by Doctor Hershel Greene (Wilson). Hershel tends to Carl’s wounds but discovers there is internal bleeding. Shane and Otis must venture to a nearby high school to gather medical supplies so that Hershel can perform surgery to help Carl.

Most of the group heads to the house, but Daryl and Dale remain with the RV to create a sign with directions for Sophia in case she finds her way back.

The episode ends with Shane and Otis barricaded and surrounded by a horde of zombies after having retrieved the medical supplies.

I thought first episode of The Walking Dead’s second season was fantastic and the follow-up to it did not disappoint. As each minute of each episode ticks past, I lose more and more hope for the safe return of little Sophia and only have hope for Carl because he’s still in current episodes. I can only imagine how intense the struggle over the fate of the two youngest survivors would have been to viewers at original air dates.

I’ve mentioned this before, but The Walking Dead has some great cliffhangers. ‘Bloodletting‘ is no exception.

“Am I the only one Zen around here? Good Lord!”