In the intro we see the Sleepy Hollow sign with the original population quota. Justifiable because it’s a recap but I want to see the population count declining appropriately.

Crane (Tom Mison) flees the headless horseman. I hope there’s not too much of this, it could get repetitive. FAST.

Now there are 4 horsemen but only one is missing its head.

Ah, it’s a nightmare. You can tell because the vines animate and suck him down.

Oh, wait, it’s not a nightmare, it’s Katrina (Katia Winter), Crane’s wife, who sucked him down into the ground to save him from the horsemen.

Crane is supposed to stop “one of us” — presumably a witch — killing before the blood moon. I leap to the witchly conclusion immediately but Crane, the Oxford professor, takes a lot longer. Also blood moons happen more than once every 250 years. Just sayin’.

Crane wakes up; it WAS a nightmare.

Crane isn’t allowed to leave his hotel room. He’s a prisoner of the police because he’s a material witness in an ongoing investigation. Wow, what happened to the law in this town? Someone please explain!

Abbie Mills (Nicole Beharie) is arguing with Irving (Orlando Jones) who has reversed his support of Abbey and Crane. Apparently because he’s an officer and a man in a suit, he outranks Abbie Mills because she’s a woman in sheriff’s uniform. Please explain.

Crane is watching Planet of the Apes; an ape is yelling, looking angry and riding a horse. Crane’s expression? Priceless.

Irving won’t be at the funeral. He’s delegating to Mills but constraining her with very vague instructions that she could ignore if she wanted.

Mills says “it’s the law” that Crane is a prisoner. What fucking law? Come on, what planet do these guys live on? Policing in Sleepy Hollow doesn’t seem to bear any relation to any other US cop show I’ve ever watched, no matter how unrealistic and hole-filled the plot.

Crane tells Mills about his dream then starts eating donut holes. I guess the donut holes go with the plot holes. He’s hooked. He’ll be HUGE by next week’s zode. HE’LL LOOK LIKE A HUGE WALKING DONUT HOLE.

“It appears evil has found a new home in Sleepy Hollow”. Just before a headless corpse rises from the dead in the morgue. Oh, wait, it’s not headless, it’s Brooks (John Cho) resurrected with a twisted neck. He’s pieced back together then spews up a necklace with a pendant that looks suspiciously Order of the Golden Dawn. Aleister Crowley would be proud.

Crane’s wife didn’t like Crane when they met; I want to hear this story. He’s not sharing. He’s sidetracked by the cost of the meal. “What is insane is a 10% levy on baked goods”. Cue rant. HE’S ANTI-GST. I LOVES HIM.

Mills and Crane plan a cover so Crane doesn’t get sent back to the psych ward.

Brooks is back bein’ bad. No one stops him taking a cop car and going on his merry way.

Um, why did a woman burnt for witchcraft get a nice cemetery plot with a headstone IN THE CHURCH GRAVEYARD? Hmmm? Have the writers done NO research???

Brooks is timid as he places the pendant on a plinth. He’s died and come back from the dead yet he’s scared. A charcoal woman with glowing embers rises from the dead. Oh, ok, I’d be a bit timid too Brooks, IF I WAS STOOPID ENOUGH TO BRING HER BACK FROM THE DEAD.

Brooks pulls over a bypasser (a person passing by as opposed to a bystander who’s just standing around) who asks what is wrong with Brooks’s neck. “Wherever this road takes you, and it won’t be far, I want you to know it wasn’t personal”. Heartwarming words to ponder while bypasser’s car becomes bystander’s car because it won’t start and the witch approaches…

“What are we supposed to do, put out an APB on a woman with warts and a broom?” says Mills.

Crane doesn’t even ask what an APB is, he merely lectures on magic and his past.

Apparently Abbey has text dialogue running in her eyes and Crane is matrix-compatible and has REALLY good eyesight to read it all because he knows all about the ex. “It was in your eyes!” I’m getting a vibe that Sleepy Hollow is avoiding the interracial romance. Usually I like male-female cop-buddies without romance but Sleepy Hollow is so cheesy I wanted the extra cheese on top of the cheesy crust.

Dead old cop Corbin isn’t quite as old in the flashback where Mills makes a life changing choice. Go to jail or not. So she changed right there, like it’s that easy to turn your life around. But “I got more fathering there in that 5 minutes than I got in my entire life” is pretty awesome really. It’d be true for many people.

DRINKING GAME EVERY TIME THE BLOOD MOON IS MENTIONED. Also every reference to fire and fire residue.

Nope, you’d get alcohol poisoning. You have been warned.

Mills and Crane go the office to get the files but they’re gone. Like that wasn’t predictable. Now I’m visualizing a windmill with a mechanical crane nearby. These names are unfortunate.

Aggressive cop isn’t happy about Crane. There are lots of people who aren’t really white, so this is great.

Aggressive cop Detective Luke Morales (Nicholas Gonzalez) is Abbey’s ex. Crane interrogates Abbey about their relationship just before he takes her into the basement to break down a wall to find a hidden room he should not have known was there. I guess the details came to him in a dream. The subterranean tunnels built in the war should be a mystery for him because landmarks have changed so radically since his lifetime. He should not have been able to locate them.

Witches were denied a Christian burial. Abbey points out the inconsistency between black witch and Katrina Crane because Ms Crane is supposedly buried in the church cemetery.

Mills and Crane climb a ladder into a storage room to find records. Crane, man from 250 years ago, seems to be the only one who knows his way around town. This is starting to irritate.

Crane has a near-perfect memory. Convenient. STILL DOESN’T EXPLAIN HOW HE FOUND THE RECORDS.

A witch used white magic to disempower a black witch who was then burnt. Does that make her a grey witch? Because black and white — never mind.

The resurrected black witch is going around town gathering the ashes of the descendants of the man who convicted her.

This week’s quest: Burn the burnt witch and bury her bones where she’ll never find them.

Again with the banter. The plot may be wholly holey but I love the banter.

Brooks-boy isn’t exactly reverent when he’s talking to dead witch nor when he handles her remains. I’d give him hell if I was her.

“Just aim and pull the trigger,” says Abbey. What, no safety catch on the hand gun?

Witchiepoo assembles her bones, pouring her victims’ ashes over. While she writhes on the ground gaining human coloring, Crane approaches. A few ashes strategically cling to her boobs. Wait, a few remnants of her formerly-modest clothing cling to her, concealing the bits that should be showing after all her clothes were burnt with her body while also aiming for sexy tramp.

“You dropped your gun,” snipes Mills.

“It was empty,” says Crane.

“You only fired once,” says Mills.

“It has more?” says Crane. Priceless.

Such a Big Bang Theory yet the tunnel remains intact. I guess it’s Sheldon’s spot.

Minion says, “Such a charring duel.” I don’t get it but I don’t ask for an explanation. I suspect he’s thinking of Charing Cross and is a tad confused.

Corbin is sitting in his office. “If you’re going to haunt me, be helpful,” says Mills.

Mills’s makeup is understated, it almost looks natural. It’s excellent to see a leading woman who looks more practical than wannabe-sexy and yet she’s gorgeous as is.

“Don’t be afraid of room 49,” comes the message from the other side. Room 49 houses her sister.

We see the sister taunted by her psych nurse. It’s very Terminator II.

As stated previously: this series is seriously cheesy with holes so it’s Swiss Cheese. So far Sleepy Hollow has horror, humor and character. You’ll love it or hate it. 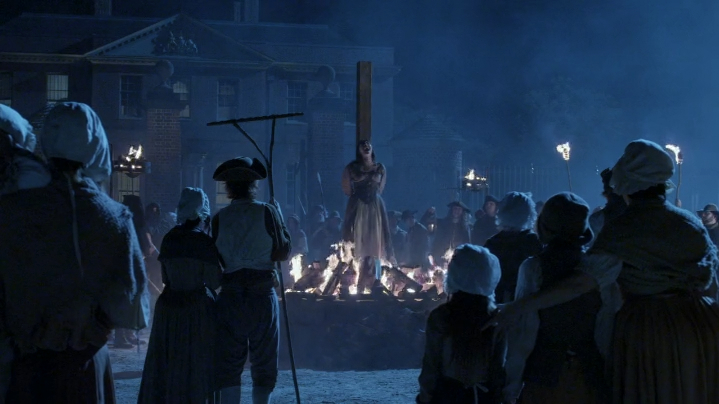