I started watching Orange is the New Black a while ago and thoroughly enjoyed it. I wasn’t reviewing it so I was under no pressure when other shinies distracted me. Nor was there any expectation that I’d write reviews. All this changed when I received a review copy. So here I am, back in black. I mean orange.

Blondie Chapman (Taylor Schilling) is looking chipper when she leads the wimmenz into Healy’s (Michael Harney) — the sexist homophobe — office to eat donuts as part of the women’s committee that he set up in the previous zode. The others want pillows and 50 Shades of Grey while Chapman asks for health care, legal counseling and education.

He blackmails the women’s committee by offering them blood donuts: bearclaws and coffee in exchange for him doing fuck all for the inmates.

Doggett (Taryn Manning), the Lindsay Lohan lookalike complete with crystal meth teeth, is rabble-rousing in the laundry because she didn’t get on the women’s committee.

Chapman sneaks a game on a phone in the toilet when someone sends her a dick pick. We see it in ALL its erectile glory. It could be an advert for Viagra.

Reznikov (Kate Mulgrew) is rife with Russian ‘tude. ‘Everything off the books lives like Anne Frank’ then she gets vanilla out of a paper towel dispenser.

Chapman tries too hard and learns the hard way not to try too hard.

Mustache’s sense of humor is that of a 3 year old. He likes dog names that hint at bodily functions and slang for genitalia. ‘Shit-zu’, ‘Poo-dle’. A literary genius.

Healy asks his wife and her mother to speak English at his dinner table. Mom cackles, saying ‘3 more years for a green card’, ha ha. Healy’s wife says, ‘You don’t have to fuck him’. The women’s banter inspires grudging sympathy for Healy. Later he’s reading a Ukrainian dictionary. I smell trouble brewing.

Chapman’s fiancé sold her out for a felonious fiancé column in the New York Times. Not that he’s told her yet. The shit will hit.

George ‘Pornstache’ Mendez (Pablo Schreiber) wants to be ‘friends’ with Reznikov. Meaning he wants her to smuggle drugs into the prison for him. His technique for making friends makes me stabby.

Why is Mendez listed as ‘Pornstache’ on IMDB when Joe Caputo’s mustache is even more porn-worthy?

Watson’s flashback is awesome: a thug tells her to get out of the party so she has a future. He offers to buy her sneakers. He’s so sweet. A creep hits on her on her way out the door. Short version: we see how she ends up in jail.

Larry Bloom (Chapman’s fiancé played by Jason Biggs) doesn’t want to be ‘that guy’ sitting at a typewriter at the bar. The barmaid says that guy is worth about $70 million. Desperate sad-sack fiancé proceeds to dig himself into the shit, deeper and deeper. I thought he was going to end up banging the barmaid but he’s so pathetic and she seems to have too much self-respect.

Healy suckers Chapman into being his stooge then breaks their deal. Chapman talks to Fischer (Lauren Lapkus), a friendly guard, who talks to Joe Caputo (Nick Sandow) who institutes Chapman’s request to open the track so inmates can walk for health to save the prison money. Chapman is learning the ropes in prison.

Healy isn’t a happy chappy. Retribution may be awful or he may learn not to mess with the ladies. I expect retribution.

Blood donuts are the price the women’s committee is willing to pay to pretend to advocate on behalf of the inmates, much to Chapman’s dismay. One inmate threatens another with oral sex so good that ‘it will ruin you’ (as a straight Christian); Orange is the New Black subverts expectations. It may not be Machiavellian in its political depths but its portrayal of human nature and politics, both outside and within the prison system, is intelligent and entertaining. 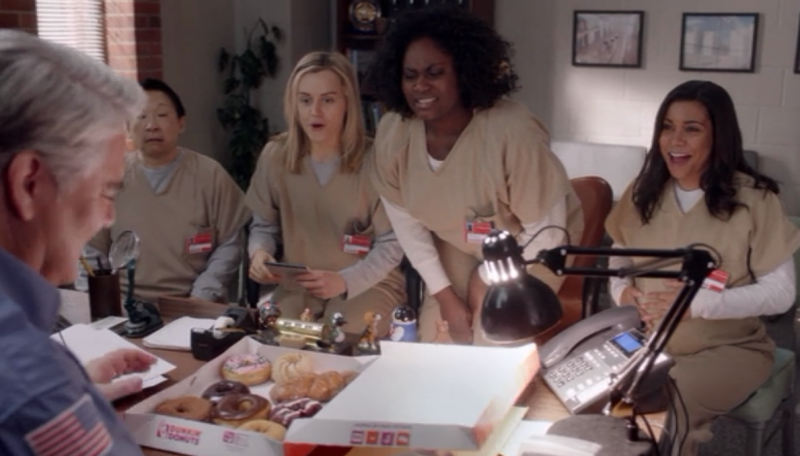