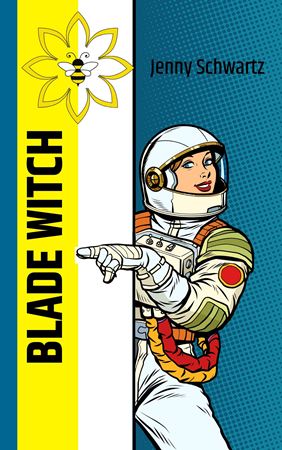 Martha is a Blade Witch who hasn’t been home in 7 years and six months but, dammit, she’s going straight home straight after her current bodyguard contract is done. The only problem is, once her contract is over, her client, Eric, wants to come too. Eric thinks he’s in love with her. Martha figures that he’ll get over it once he’s met the real her. Besides, he’s a formidable supernatural in his own right so his services could come in handy, right?

On her way to the junkyard to purchase a ship to take her home, an AI tries to pick her pocket. She adopts him, as you do. But not until after she accidentally named him. ‘Kid’. Because he’s a child AI who needs a home before his time in Orphan Alley is up.

Then there’s the bat-man. No, not Batman, he’s a bat who’s a man and no he didn’t escape from Dave Freer’s uplift novels. He’s the pilot. Martha relishes telling Eric that he’s subordinate to the bat-man who gets drunk on lemonade and all things sugar.

I was disconcerted by the opening chapter because of all the weird words and invented idioms. By chapter two I was charmed by this silly seasonal story. It sucks you in. My only concern is the whole ‘he won’t take no for an answer’ trope. However, Martha is her own woman. Who kills people. She’s a bad-ass. So if she allows Eric within her personal space, it’s consensual.

Blade Witch is set in the lead-up to ‘Thanksbee’, a celebration that is clearly a combination of Thanksgiving and Christmas. However, bees take the place of Santa so the color scheme is brown and yellow. Martha tells the legend of Thanksbee, making the origins clear while also editing the story for Kid’s consumption. The underlying and never-mentioned message is that we need bees and we’re currently killing them with pesticides. Somehow bees survive the 21st century and become a symbol replacing the turkeys that American pilgrims ate after apparently devastating the Native American population. Schwartz not only decolonialises these holiday celebrations, she builds a new one that unifies the remnants of humanity who expand into space.

Blade Witch is a silly fun romantic seasonal story with its unique version of Thanksgiving crossed with Christmas that will suck you in. I love and adore that bees replace Santa for a start, how wonderful and gorgeous is that???) I highly recommend this short story/novella. Fantastic Christmas reading.

Buyer beware: I was reading then took a mouthful of my drink. When reading the next sentence I nearly sprayed coffee everywhere.