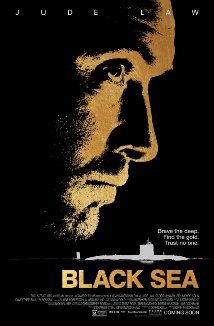 Captain Robinson (Robinson Crusoe? Sorry, but someone had to say it! played by Jude Law) is sacked by his employer of over a decade. A mate tells Robinson about a salvage in the Black Sea worth millions in gold, forgotten loot sunk during World War II. Robinson and a bunch of misfits band together to get the loot and to avenge themselves on their former employer.

The crew is half Russian and half British, a cultural divide that causes conflict, especially when Robinson calls equal shares for all of the crew. Fraser (Ben Mendelsohn) rants that the Ruskies will kill them all to make their share of the loot bigger — and then he’s the first man to wield a knife in anger.

Although the movie is suspenseful, there are a number of “WTF?!” moments that jolted me out of the story, both plot-wise and when a few characters suddenly changed direction. The minion commented that he would have liked a slightly different ending but, considering the content of the story, I was satisfied with the end. And my heart took a pounding from the adrenaline on the journey.

Black Sea has practically an all-male cast; apparently there was no consideration that women might work in the submarine industry in the 21st century.

Black Sea starts and ends like a heist movie but in between it’s an adrenaline-filled claustrophobia-inducing underwater disaster movie combining a bit of Gravity, Armageddon and Poseidon.

“This wreck will sink!”
“It’d be a fookin’ useless submarine if it didn’t.”