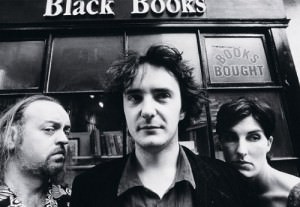 Black Books is an iconic British comedic TV series about which I’ve heard much. Previously I tried watching an episode here and there but I find I need to watch right from the beginning of a series to develop the necessary frame of reference to enjoy the series. Recently I secured the entire series, put one disc in and sat down with my coffee.

Bernard Black owns a bookstore. He’s completely incompetent, unable to manage his own (financial) books, loathes customers, lacks motivation to clean his store, maintain his stock or any of the other duties one might assume are essential when one owns and manages a bookstore.

Fran works next door in a shop that she, likewise, owns and apparently manages in a rather ad hoc manner. Fran receives stock that – presumably – she ordered. She can’t figure out what some items are, so she wanders around experimenting and hypothesising about their purpose.

Manny is an accountant, frustrated with his present position and looking to move on to a less stressful job. Manny rescues Bernard from the consequences of his own actions and, along the way, spontaneously shows Fran the function of the objects of her frustration. Bernard offers Manny a job then reneges. Fran takes charge. Thus the pattern for the series is established.

In subsequent episodes, the trio vary in their relationships, offering social comment as garnish for the plot. At times Bernard and Fran are parents of Manny together, at others Bernard and Manny take the role of Fran’s fathers. Sometimes they are more peers although Bernard is the perennial bully, making Manny’s life miserable, but not so miserable he wants to leave.

Black Books can actually justify usually failing the Bechdel Test. Of the three central characters, only one is a woman. If downtrodden Manny was a woman, the dynamics of the show would be distinctly unpalatable as we’ve all seen that before. If Bernard was a woman, he’d be the bitchy boss, a ‘devil wearing Prada’ type boss without the hygiene. Or the Prada. Fran is the woman, saving Black Books from being a show about three guys. When other women feature, Fran sometimes ignores them – she’s somewhat anti-social – but when Fran talks to other women, the Bechdel test is passed with flying colours. What sets Black Books apart is the lack of assumption that women are sex objects or obsessed with men. Fran is a woman who happens to have two men as her best friends. She also has a healthy libido but this does not dominate her conversation.

I watched one episode.

With the next episode I felt I really needed to do something constructive as I don’t want to be suckered into daytime television – it can be addictive. I rode the exercise bike. After riding the bike and lifting weights, the disk was still going; my guilty pleasure was such that I still didn’t want to turn it off. I did the ironing. By the time the disc came to an end, I still had not had my fill but my partner was home for work so I was left wanting more.

Needless to say, until I finished watching Black Books, both my exercise program and the ironing were well managed. It’s a pity it’s only one season.