Dwayne Johnson plays Black Adam, originally Teth-Adam. As a former wrestler – the performative kind not the “real” kind – he’s been typecast as an actor. He’s more likely to star in cheesy schlock like The Scorpion King and Jumanji than serious movies. And I am here for that.

However, the advert I saw for Black Adam was mostly serious with only one hint at humour. So I started watching with a teeny bit of trepidation. Would Black Adam be fun? Or would it be more Man of Steel angsty blech?

DC took the Shazam magic, created a fictitious civilisation prior to or Egyptian pyramid adjacent, and an evil ruler. Add complications. And you get Black Adam. We learn this via flashbacks through the movie. Although the Honest Trailers guys seem to have missed the part in the trailers that specifically stated that Teth-Adam’s SON was the reason he acquired powers.

Black Adam is cheesy fun. Unlike Willow, which seems to have too many cooks spoiling the broth to know whether it’s serious or schlocky, Black Adam revels in its over-the-top cheese and comedy.

Admittedly, after he smashes through a wall for the tenth time I was over it. But someone asks whether they had doors back in his time. Johnson keeps a perfectly straight face when he acknowledges familiarity with doors.

The Honest Trailers guys did a trailer for Black Adam.

The Honest Trailers guys mostly nail Black Adam, as they did with Pacific Rim. After watching these Honest Trailers you know what you’re in for, and that’s a wild fun ride with lots of explosions. And phallic weapons.

But they missed a bit…

I disagree with one comment from Honest Trailers. They said there wasn’t anything serious, no messaging, nada, in Black Adam.

They were oh so wrong.

Yes Black Adam is a cheesy trashy movie BUT you have a person of colour in a Middle Eastern type country with lots of people of colour casting shade on the Justice Society.

The Justice Society said they were there, in this non-American country, to enforce global stability, i.e. American goals and corporate theft.

People in this fictitious country basically say “Where were you when we needed you? Now we have a superhero, you want to crush him and us? No!”

Black Adam is a cheesy, schlocky, BAD movie in SO MANY WAYS. But it embraces the cheese, creating a fun romp with murder, mayhem, and trashing of ancient relics. Critiquing American geopolitical interference embellishes the plot, adding substance.

My biggest disappointment: that contemporary Shazam wasn’t mentioned and that there won’t be a Black Adam vs Shazam comedy. I’d pay to see that!

And the best/worst part of watching the Honest Trailer is that it’s impossible to unsee/unthink Pierce Brosnan’s fondling of that helmet. 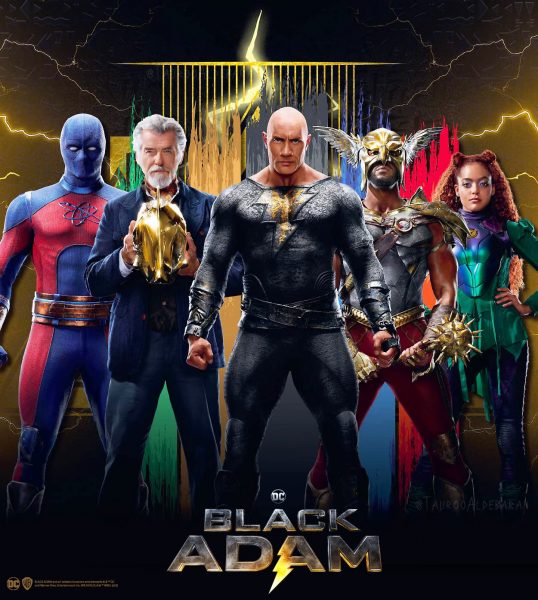