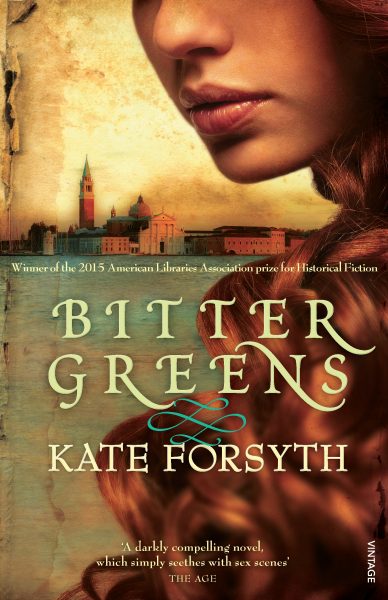 Bitter Greens by Kate Forsyth is a well-researched retelling of the Rapunzel fairy story as well as the history of the fairy story. Set in what appears at first glance to be historical France and Italy, Bitter Greens has real magic woven into the fabric of the world as well.

Charlotte-Rose de la Force is a Hugenot in the seventeenth century, a time of political persecution of Hugenots, with the capricious Sun King of France and his court descending on the homes of families who struggle to meet his expectations for lavish hospitality, then suffer at his whim. Having lost her mother at the whim of the King, Charlotte-Rose goes to court as a lady-in-waiting, a career mixing success with scandal. Imprisoned in a convent at the whim of the King, Charlotte embarks on a journey of self-discovery, recounting her story episodically, counter pointed by the story of Rapunzel, told to her by another nun.

Rapunzel’s story is set in Italy the previous century. A girl is taken from her parents by a witch and locked in a tower. At first it appears that this is the story of the girl, but later it becomes the story of the witch. Going back further in time the reader learns there have been a string of girls used by the witch to retain her beauty, while aspiring to immortality.

As with many fairy stories involving women, Bitter Greens is a story about women living in a man’s world, how the women respond to limitations imposed upon them by society and the lengths to which they are prepared to abuse other women in order to achieve their goals. The machinations and manipulations of the witch in the Rapunzel tale and the women in the court of the King of France are appalling. The moral of the tale seems to be that such machinations and manipulations have a price that rebounds on the perpetrator, while redemption lies in repentance and service.

Issues of fashion and self-mutilation for ideals of beauty are barely touched upon in Bitter Greens, which seemed to me counter-intuitive to this story about women. Belladonna eyedrops were used in Bitter Greens along with a passing mention of the risks involved, but not the pain or detrimental impact upon vision. I found this confronting: when I was very young, my father told me the eye drops given to me by an ophthalmologist were belladonna, formerly used as a beauty treatment. This was in response to my bitter complaints about visiting the ophthalmologist yet again, the pain and suffering I endured with the eye drops (they’re a lot less painful and don’t affect vision as badly nor for as long these days, thanks to developments in modern medicine). I demanded to know why belladonna eye drops were a beauty treatment: my father explained that the eye drops enlarge the pupil of the eye, which was considered beautiful. Later when studying psychology I learnt that pupils dilate when someone is interested in a topic or person; when Jane is interested in Jack, Jack will often consider Jane more attractive. I suspect my father was trying to placate me in the face of the inevitable, but he only succeeded in sowing the seeds of my life-long issues with beauty and the fashion industry. I personally wanted more exploration of the suffering women endured to achieve ideals of fashion and beauty, suffering endured while seeking approval from men, and yet Bitter Greens is already a hefty volume.

I thoroughly enjoyed Bitter Greens overall, but I had a concern with the final quarter.

Show Press Release (49 More Words)
Towards the end, Charlotte’s story was patchy: she loved and lost her husband, but the seeds of the romance were omitted entirely, the reader jumps in to that portion of her life after the romance had begun.  I wanted more but Kate developed Charlotte’s story based on limited historical documentation.

Bitter Greens is a must-read for people who love fairy stories and historical fiction.