UPDATE: MP3 of speeches is now at the bottom of this page.

“It’s that time of the year when the giant arse from space hovers over Melbourne and delivers us a great golden shower of comics. Raise your fresh faces to the delicate rain of intelligent writings and brilliant drawings of dozens of writers and artists from around the world. Contains adult themes, rock’n’roll, drugs, dirty talk, scuds of nudity, weird sex, tons of violence and other fun things that shouldn’t be taken seriously. Hosted once again by the notorious kingpin of the Melbourne comic scene, Mr Bernard Caleo.”

Walking through Sentido Funf to the beer garden in the rear, the crowd unfolded before me.  The comic book crowd had already (largely) arrived although more were to trickle in over the next hour or two.  I nabbed a comfy seat near the entrance, so witnessed people like Jason Franks and company arrive, laden down with boxes full of comic book goodness.  Frank Candiloro came over to say ‘hi’ and chat; he’s always sociable and friendly, making time for us plebes even at this kind of launch.  Later I caught up with Lindsay Walker of Phantom comics fame and Colin Wilson of Star Wars comics who is currently solely working in European comics.  Other notables were there, supporting their comrades in arms who were launching their latest endeavours.

The atmosphere was convivial with people standing and sitting around drinking and eating, lining up to have their purchases autographed or even illustrated. 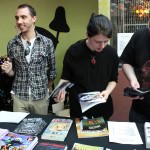 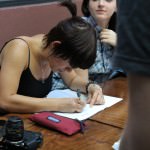 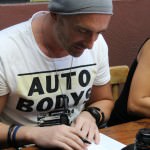 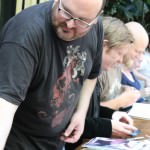 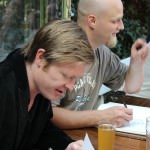 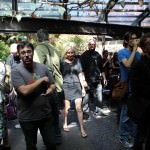 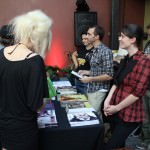 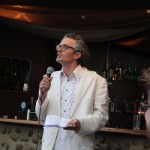 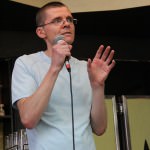 A BRUSH WITH DARKNESS
By Dillon Naylor

BALLANTYNE: THE FLAW IN THE JEWEL
By Peter Foster

YUCK! #7
By various and nefarious