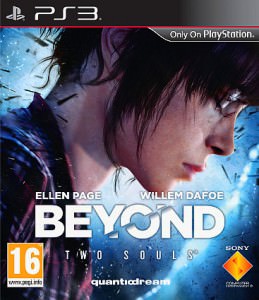 This was an interesting one – I finished it a little over a week ago and have been mulling over how it should be approached from a critical perspective. At it’s core, Beyond: Two Souls feels like an extraordinary evolution of the old text-based ‘choose-your-own-adventure’ games, with high quality visuals, acting and script. However, this creative philosophy has come at the expense of what most would consider good game design.

Beyond features a female protagonist named Jodie, inextricably linked with another soul named Aiden, a ‘ghost’ if you will, who has varying abilities to alter the environment around Jodie and shield her from harm. The game covers Jodie’s life from birth right up to the present (and some glimpses into the future, hinting at possible sequels), with the narrative presented non-sequentially, as the player jumps around a linear path pre-determined through Jodie’s lifetime.

Beyond features an evolution of the combat mechanics from Fahrenheit and Heavy Rain, immersing the player in high-quality motion captured combat. I thought the combat was animated and captured extremely well, quite an astonishing feat when you consider the sheer amount of pathways and potential combinations of moves throughout the scene.

However, I was continually disappointed throughout by the actual interaction within the scene, flicking one joystick in various directions to perform attacks or dodges felt clumsy and unimaginative. The experience bordered on frustrating when the scenes became too chaotic and dark – sometimes direction was vague and clumsy.

One of the aspects of the game I found most interesting is it’s determinedness to shrug contemporary concepts of game design. Along with the last two Quantic Dream titles (and a few other similar titles in recent memory, e.g. Telltale’s The Walking Dead and The Wolf Among Us), Beyond stands out from traditional games as something akin to an interactive movie. And that’s what it really is – a fully acted, scripted and animated movie, which places the player in the director’s chair.

So therein lies a conundrum – how should Beyond: Two Souls be reviewed? It isn’t really trying to be what most would consider a video game. It combines the kinaesthetic feel of video game interaction with the formal narrative structure of a film or novel. I would argue Quantic Dream’s titles, including Beyond, have done much to reinforce and reinvigorate interactive movies as a viable genre of media. Thanks to the powerful technology showcased, the potential of interactive movies seems largely limitless now compared to the then stilted, awkward and generally awful attempts of the 80s and 90s.

That being said, the game has flaws. Oh boy. Consistent with David Cage’s (the Owner/Writer/Director of Quantic Dream and their games) previous games is an absolute lack of consistency regarding narrative and character interaction. Some things just don’t make sense, and there are plot holes so large you can park a semi-trailer within. What bugged me the most though, was the existence and omnipotence of Aiden being a shamelessly convenient deus ex machina. Aiden is exploited and re-used time and time again in order to facilitate tense moments and thrust the protagonist in otherwise impossible situations.

Some of the dialogue is nonsense and occasionally characters will appear schizophrenic. There is a scene within the game focusing on Jodie’s first experience at a teenage party, and it is particularly awful for this reason. It is without a doubt the worst scene in the entire game, although benefits from letting me throw chairs at bratty teenagers.

That being said, I think that one has to acknowledge the many problems and limitations of creating a cohesive and consistent story when you are trying to provide for various player choices and create a branching narrative. The tension between trying to provide for a wealth of player choice yet provide a tightly driven narrative is palpable. The reality is that real choice makes a substantial amount of content necessary yet superfluous. Should they create enough content to populate two full games, just in order to satisfy a desire for meaningful player choice? Where do you draw the line? These are hard questions for any creator to answer, particularly engaging within a medium in its infancy.

A game where that the player could navigate through the game and see half the content, requiring another playthrough to see the whole product, would certainly be divisive. Not only from a business perspective (thinking about the costs of production), but from a players’ perspective, you might create an amazing game for some, and not others. For those who would like to see the full game and hence playthrough multiple times, this could devalue the experience of the original choices and story.

In Beyond, Cage decided for the safe approach, creating a relatively linear story and populating each scene with superficial choices. Most of the player’s decisions are fairly meaningless, serving a purpose in the scene they are contained and largely do not have further ramifications. All experiences within the game serve a peak importance when the player reaches the climax and is given many branching choices of how to conclude the game. As far as compromise goes, its a pretty shitty one but understandable nonetheless.

A special mention has to be given for the the soundtrack – truly phenomenal. It features some of the last work of Normand Corbeil (the Heavy Rain composer) who sadly died during the game’s production cycle. Filling in the gaps is the legendary Hans Zimmer, lending a hand to his colleague Lorne Balfe, who does a fantastic job of capturing emotion and providing a rich aural landscape for action scenes.

Overall? I… quite enjoyed the experience. Whilst I found myself tutting at various moments of awful dialogue and had frustrating experiences with the combat system, I truly did enjoy my time with the game. It provided a rich, unique and immersive experience which was a refreshing contrast to the general swathe of modern blockbuster video games.

Quantic Dream have cemented their place as a pioneer of interactive movies, and while their titles are deeply flawed, I am always curious to see what they do next. Do yourself a favour: suspend disbelief and don’t think TOO hard about the story, and you’ll have a thumping good time with Beyond: Two Souls.