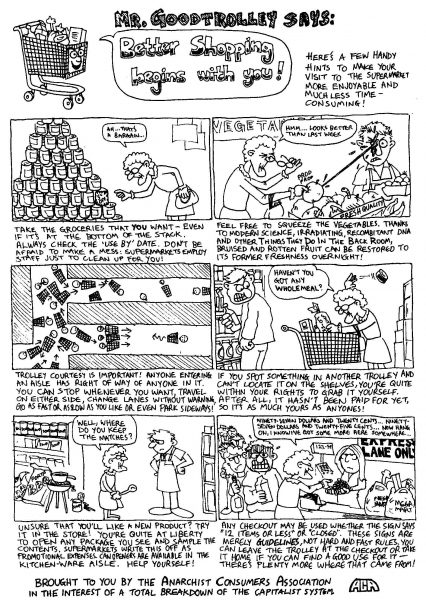 Yeah, our favourite (?!) shopping trolley is back again, encouraging consumerism by telling us “Better Shopping Begins with You”. He probably thinks microplastics in our diet is a good thing!

“Here’s a few handy hints to make your trip to the supermarket more enjoyable and much less time-consuming!”

An elderly woman says “Ah, that’s a bargain”, and reaches for a can low in a pyramid stack.

Goodtrolley says, “Take the groceries that you want, even if they’re at the bottom of the stack. Always check the use-by date. Don’t be afraid to make a mess: supermarkets employ staff just to clean up after you!”

The elderly woman in the fresh food section pokes a tomato so hard it squirts a man in the eye. She says, “Hmm, looks better than last week.”

Goodtrolley says, “Feel free to squeeze the vegetables. Thanks to modern science, irradiating, recombitant DNA and other things they do in the back room, bruised and rotten fruit can be restored to its former freshness overnight!”

Looking from a bird’s eye view, trolleys block aisles and look like PacMan’s ghosts are ganging up on him.

Goodtrolley says, “Trolley courtesy is important! Anyone entering an aisle has right of way over anyone in it. You can stop wherever you want, travel on either side, change lanes without warning, go as fast or as slow as you like or even park sideways!”

[This sounds like Canberra traffic and nondisabled people on footpaths — Editor.]

The elderly woman asks, “Haven’t you got any wholemeal?” while going through someone else’s trolley and throwing things out of his trolley. The trolley-owner is a few steps away from his trolley but he’s turned back towards her. He looks PISSED OFF.

Goodtrolley says, “If you spot something in another trolley and can’t locate it on the shelves, you’re quite within your rights to grab it yourself. After all, it hasn’t been paid for yet, so it’s as much yours as anyone’s.”

The elderly woman has set up a barbecue in the store with a pot on top and quite a mess in the aisle. She’s holding a wooden spoon and is talking to a very angry shop assistant. “Well, where do you keep the matches?”

Goodtrolley says, “Unsure that you’ll like a new product? Try it in the store! You’re quite at liberty to open any package that you see and sample the contents. Supermarkets write this off as promotional expenses. Can openers are available in the kitchen aisle. Help yourself!”

Having left a trail of destruction and chaos in her wake, the elderly woman is now counting out coins to pay for her groceries. The shop assistant looks glum but the shoppers queuing behind her look furious.

Goodtrolley says, “Any checkout may be used whether it says ’12 items or less’ or ‘closed’. These signs are merely guidelines, not hard-and-fast rules. You can leave the trolley at the checkout or take it home if you can find a good use for it — there’s plenty more where that came from!”

Brought to you by the Anarchist Consumers Association (ACA)
In the interest of a total breakdown of the capitalist system.