It isn’t easy being related to a feminist icon. Just ask the daughters of Lydia Hennessey, who could have it all if only they’d stop self-destructing. Mariana, the eldest, is on the verge of throwing away a distinguished reputation in journalism, along with her marriage. Nina, the middle daughter, has returned from a medical mission overseas as a changed woman. But she won’t discuss it with anyone. And Beata, the youngest, has a hostile teenaged son who just discovered the existence of a father who didn’t know about him either. Meanwhile, their cousin Zoe is making divorce look like a death match. (Better luck next time.) And her brother Zack is grappling with the fallout from his popular television dramedy, which is based far too closely on Lydia herself.

This delightful story follows the Hennessey clan over the course of an extremely eventful year. We avidly watch as they contend with the big struggles of midlife: aging parents, raging teens, crumbling marriages and bodies, new loves and the choice between playing it safe or taking life-altering risks. And as they inch toward a new definition of happiness, they might even persuade their parents—and themselves—that they’re all grown up.

As I have probably mentioned, I am a huge fan of stories involving dysfunctional families trying to find their way in the world. Hilton describes this one as a ‘divorce comedy’ and humor is certainly what she provides in bucket loads.

Hilton writes parts of this book through a feminist lens but again it does not feel out of place or heavy. Her witty and clever writing triumphs in showing the struggles of women being recognized as equal. The development of her female characters pays tribute to the eclectic, resilient and brilliant female species.

I absolutely adored Better Luck Next Time. It was the perfect antidote to get me through a cold weekend at home. This book is captivating and totally draws you in with a smile on your face. Hilton develops fantastic characters for each of the Henneseys and the reader quickly becomes aware of their motivations and internal battles. This is a book that you can’t help but want to race to the end of to see how things turn out. All the characters are believable and likable. The story is humorous and uplifting but Hilton also manages to sneak in some serious themes. This makes for a realistic and relatable read but one that is not emotionally heavy.

An enormously enjoyable read. This is one I will be recommending to all of my bookish friends who love an engaging and fast paced lighthearted comedy, with a bit of drama and romance to boot.

I knew I wanted to read this one! Sounds like a book for Marian Keyes fans. I’ve loved everything I ever read by Keyes; here’s a review of one of her books. – Editor 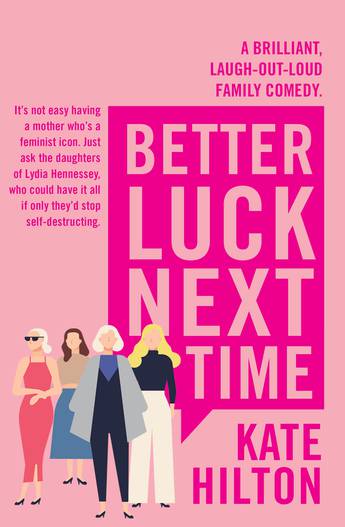