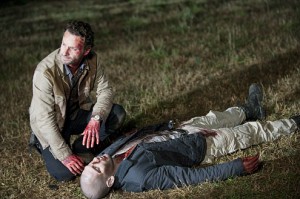 ‘Better Angels’ begins with the group holding a memorial for Dale at the expanding graveyard.

Hershel (Wilson) lets the group move from camping on the farmland to sharing rooms in the house.

As Lori (Callies) tries to mend fences with Shane (Bernthal), Daryl (Reedus) and Rick (Lincoln) plan to take Randall (Zegen) as far out as they can and leave him with shelter.

Randall tries to free his hands from the handcuffs holding him in the shed. Shane discovers this and leads Randall into the woods. Shane snaps the young boy’s neck to make it look like he died after attacking Shane and fleeing with his gun. After killing Randall, Shane returns to the camp and lies to the group to get Daryl, Rick, and Glenn (Yeun) to look for the prisoner.

Daryl and Glenn split off from Shane and Rick to follow Randall’s tracks. It is along these tracks that they come across zombie Randall who has obviously died of a broken neck – no bites.

As Rick and Shane walk through the woods, Rick realises Shane is going to kill him and tries to reason with him. It becomes apparent though that Rick’s peaceful ruse is intended to disarm Shane. Rick kills Shane.

Carl (Riggs) arrives and pulls a gun out. Rick believes it is meant for him, but Carl shoots Shane who has risen as a walker.

‘Better Angels’ ends with nearby walkers hearing the commotion and heading en masse toward the farm.

Things are starting to get interesting again. The walkers are descending on the group’s safe haven and Shane has finally received what has been coming to him for most of the series. It’s a relief to see the action picking up again (in no small part because I’ve already bought season three!). Solid episode.

“He said this group was broken. The best way to honour him is to unbreak it. Set aside our differences and pull together. Stop feeling sorry for ourselves and take control of our lives … our safety … our future. We’re not broken. We’re gonna prove him wrong. From now on … we’re gonna do it his way. That is how we honour Dale.”