Tonight at Continuum 8, the Victorian (a state of Australia) SFF convention, 21 awards were presented: these included awards for lifetime contributions to SFF, a special award for writing about disability and gender issues, the Victorian annual awards AND the National Convention’s annual awards.

I expected to suffer.  Oh, how I was dreading this award ceremony.  I was thinking I’d need copious amounts of coffee to stay awake, but instead resorted to modest amounts of alcohol to set the mood. 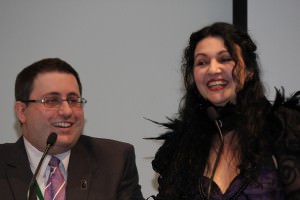 Kirstyn McDermott, an award winning author, and Ian Mond, a sadly non-award winning critic, are the team for the podcast The Writer and the Critic.  This is a podcast I only started listening to this year, but it’s an interesting, intelligent look at literature with two gentle, mature people who are clearly good friends and aren’t afraid to add some banter to their cast, all within the boundaries of good taste and professionalism (i.e. you don’t get bored waiting for them to get to the point).  Their presentation of these awards was likewise both entertaining and professional, their banter getting laughs while steadily moving the action on, finishing the award ceremony in under an hour and twenty minutes.

I sat there with my camera taking photos wishing that the awards were being streamed because there would be a number of people who would watch remotely and love the show.  Perhaps next year?  Continuum and NatCon committees, are you listening?

Attempting to rehash the awards would fail to relay the charm of the evening, however these are some of the highlights.

*  Richard Harland was not presented with the A. Bertrand Chandler Award because he wasn’t there.  A couple of OTHER people thought they’d keep his epic loot. 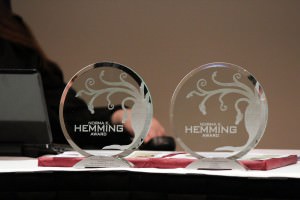 *  The Norma K. Hemming Award was given to two authors, Sara Douglass, for The Devil’s Diadem and A.A. Bell for Diamond Eyes.  Sara Douglass passed away recently after her struggle with cancer, and her estate’s representative couldn’t be there so an acceptance was read out on her behalf by Jason Nahrung (I think – I should have taken notes).  Bell accepted her award (I’m sure I’ll find her first name sometime soon) talking about her deteriorating eyesight and caring for family members with more advanced vision deterioration.  She talked emotionally, both happy and in tears, about the numerous rejections she received in her attempts to be published. 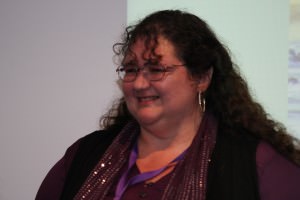 *  Merv Binns was presented with a lifetime achievement award, called the Infinity Award, while he was choking back tears. 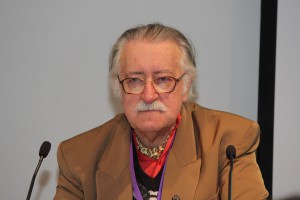 *  The Peter McNamara Award was again not presented to Bill Congreve because he wasn’t there.  They tried ringing him but to no avail.
*  Cat Sparks accepted Paul Haines’ several awards: Paul was a beloved member of the SFF community who passed away after years of fighting cancer.  Paul was a horror writer whose works are unanimously described using adjectives such as ‘disturbing’ and ‘dark’.  For more information on Paul Haines and the community’s reaction to his loss, read the definitive Paul Haines
*  Australia Post lived up to their ever-declining reputation and failed to deliver the Ditmar awards on time, so stand-in awards were purchased from the $2 shop – brightly coloured octopii.  They squeaked.  Later in the evening Kirstyn and Mondy were demanding to know if the purchaser knew they squeaked when the purchase was made…

*  Mondy was schooled on the number of legs and length of legs of octopii by Kirstyn and a few others.
*  The Writer and the Critic won the best Fan publication for both Victoria and Australia (Chronos and Ditmar awards respectively).  These awards were well deserved and added to the entertainment.  Kirstyn kindly said Ian could keep the Chronos award, gently adding that she already had three, and her husband has one, with a smug vampiric smile.  When the Ditmars were awarded, Kirstyn said she was going to keep the stand-in award but Mondy could keep the actual trophy, again adding she already had three and her husband had one.  They were as good as any stand-up duo.

Best Short Fiction:
The Past is a Bridge Best Left Burnt, Paul Haines (in The Last Days of Kali Yuga)

Best Fan Written Work:
Tiptree, and a collection of her short stories, Alexandra Pierce (in Randomly Yours, Alex)

Best Fan Publication:
The Writer and the Critic, Kirstyn McDermott and Ian Mond

Best Novella or Novelette
“The Past is a Bridge Best Left Burnt”, Paul Haines, in The Last Days of Kali Yuga(Brimstone Press)

Best Fan Writer
Robin Pen, for “The Ballad of the Unrequited Ditmar”

Best Fan Publication in Any Medium
The Writer and the Critic, Kirstyn McDermott and Ian Mond

William Atheling Jr Award for Criticism or Review
Alexandra Pierce and Tehani Wessely, for reviews of Vorkosigan Saga, in Randomly Yours, Alex

UPDATE:  for more information on Paul Haines and the community’s reaction to his loss, read the definitive Paul Haines