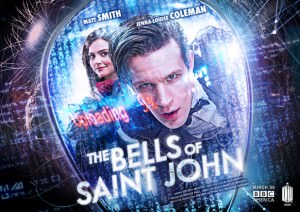 Clara (Jenna Coleman) has been reincarnated again. Remaining ignorant of all things ICT, Clara calls the Doctor (aka Mr Quiffy, Matt Smith) on the TARDIS phone for help desk support. Except the TARDIS is parked near a monastery in 12th century Britain, and the St John’s sticker on the TARDIS gives the episode its name. Because the phone rings.

By the time the Doctor reaches Clara, she’s accidentally tapped in to the free WiFi bait and she’s being uploaded. The Doctor hacks the system to rescue Clara who has been upgraded from completely ignorant about computers to making twitter jokes and using facebook to track the villain’s lair.

Doctor Who in this era is family entertainment; Stephen Moffatt has said his biggest fear is boring the audience. Limited to 45 minute episodes unlike classic Who, these stories tend to be short, high energy and filled with fan service (anti-gravity motorbike, anyone?) The same writing team works on Doctor Who and Sherlock, demonstrating their versatility and talent; I just wish Doctor Who would do more double episodes! (Blame Russell T. Davies and see the extras on the Doctor Who and the Green Death release for the reason why!)

Doctor Who and the Bells of St. John is light family entertainment in the pantomime style and works very well within that oeuvre. I’m a bit sad that this wasn’t around when my kids were growing up.