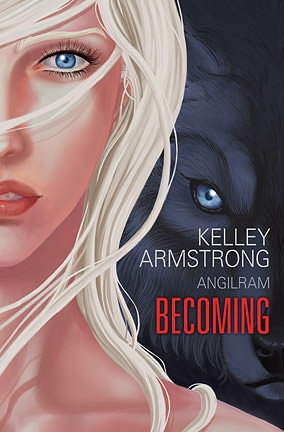 Becoming is a graphic novel.

Elena has been bitten by Clay, a werewolf, without even knowing that Clay was a werewolf. Becoming opens with Jeremy, the Pack alpha, explaining to Elena that she was bitten and that Clay is a werewolf. Elena goes through the trauma of changing, gradually learning control, but never accepting what was done to her. Becoming follows her story, giving the background to the key event, the bite and immediate consequences, that are briefly outlined in Bitten, the first Women of The Otherworld series.

I read Becoming as part of my research for interviewing Kelley (also see Kelley’s author talk and my reviews of Bitten and Spellbound), without having read any of the novels that give Becoming context. Without this necessary background, Becoming seemed brutal, especially where it revealed the actions to which Elena resorted in order to escape the Pack. Kelley assured me that Becoming was written in response to fan requests for her to write Elena’s backstory, so reading Becoming on its own is taking it out of its intended context. Once read in context, Becoming is still full of angst and drama, but it is softened slightly, knowing the similar histories of Clay and Elena and Clay’s undisputed albeit selfish love of Elena.

The artwork develops throughout the comic as the artist develops her skills and style. The artwork tends towards realistic line drawings filled with colour. The starkness of black blocked-in areas on Elena’s face as she screams against what has been done add to the drama of the story. My personal favourite panel is early on, page 5, where Elena is tied to the bed (to protect humans) and surrounded by images reflected in broken pieces of mirror. This is an evocative splash screen.

Becoming is a comic book written and drawn by women for a fan base that has a large proportion of women. While I highly recommend reading this comic and supporting Becoming, it is necessary to read at least Bitten, preferably more of the novel series, in order to place Becoming in an appropriate context.

Originally published in Dark Matter issue 6, November 2011.  This blog has been pre-dated to reflect the date of original publication.