Circa 1985, Alison Bechdel wrote a comic strip about a minimum feminist standard of movie viewing; this strip is called ‘The Rule’ and it’s from the Dykes To Watch Out For series. This minimum standard as cited in a very short stand-alone comic-for-the-day is a brief sketch that has taken the world by storm, renamed The Bechdel Test. The rules in ‘The Rule’ are that:

1) A movie has to have two women in it who

2) talk to each other

3) about something other than a man

Alison Bechdel did not intend for her comic strip to become a pop culture yardstick nor did she intend to take credit for something her friend Liz Wallace said that evolved from Virginia Woolf.

When Bechdel appeared at the Wheeler Centre in Melbourne a few years ago, she went into some detail about the rule, its history and some minimal modifications like the women must be named and should talk to each other for at least a minute.

Bechdel expressed exasperation with the current pop culture interpretation of her rule that willfully misinterprets her strip to mean that a man can be present but just not speaking for that minute.

She points out that no men appear in the relevant comic strip nor are any men present in the scene from Alien that she cites as abiding by her rule.

If a man is present then it’s not a conversation between two women, is it? she asked. IT’S A CONVERSATION BETWEEN THREE PEOPLE, ONE OF WHOM IS TEMPORARILY SILENT.

If a man is present it changes the dynamics of the interaction. If a man is present, the women do not have agency and lives outside of the domain of men. Their ‘conversation’ that the man hears is for the man’s consumption. For example, in Graeme Simsion’s The Best of Adam Sharp (a novel not a movie but the reason this came up), there is one conversation between two women that doesn’t directly have a man speaking. Adam Sharp observes the conversation, internalises and interprets it as evidence of the status of his relationship with his partner, Claire, one of the women. There were also other men and women present, the conversation/s evolving and roving as you’d expect in a group situation at a pub. On the basis of all these interactions at the pub on one night, Adam decides his partner has been having an affair and is ready to leave him. So, really, this conversation between two women was all about Adam as he interprets it instead of women having independence and agency outside of the realm of men.

Alison Bechdel’s intent is for a minimum standard of a short conversation that does not involve men in any way, shape, or form to show women as independent not subordinates in a patriarchal society.

Bechdel’s talk in Melbourne conveyed unhappiness that pop culture has taken a very low standard and reduced it to a significantly lower standard, willfully undermining her intent.

In the past few days people have linked TV Tropes to me twice because TV Tropes — a community-edited website — says that if a man is present during the only conversation/s between two women, the story passes the Bechdel Test. On Twitter a person told me that the original comic strip doesn’t specifically say that men shouldn’t be present.

However, Bechdel said she thought that was obvious in her comic strip and example.

Finally, one (allegedly) woman (on Twitter) told me that my feminism is “narrowly defined” because my definition of the Bechdel Test is so harsh as to require a

minimum of
one conversation
between two named women
lasting a whole minute
WITHOUT A MAN PRESENT.

I’m surprised that such a low bar for representation of women is contentious but I guess it’s because, if the bar was set at Bechdel’s actual standard, hardly any movies would pass unless they were ‘chick’ movies.

The point, folks, is to represent women as PEOPLE with independence and agency instead of incidental creatures or objects whose placement is to benefit male characters. This standard doesn’t even ask for equal representation, it’s just a bare-bones minimal standard that says that women are people too.

I won’t compromise on my definition because it is consistent with Alison Bechdel’s presentation in Melbourne. It’s already a very very low bar; if you can’t step over this bar, you don’t deserve a pass. 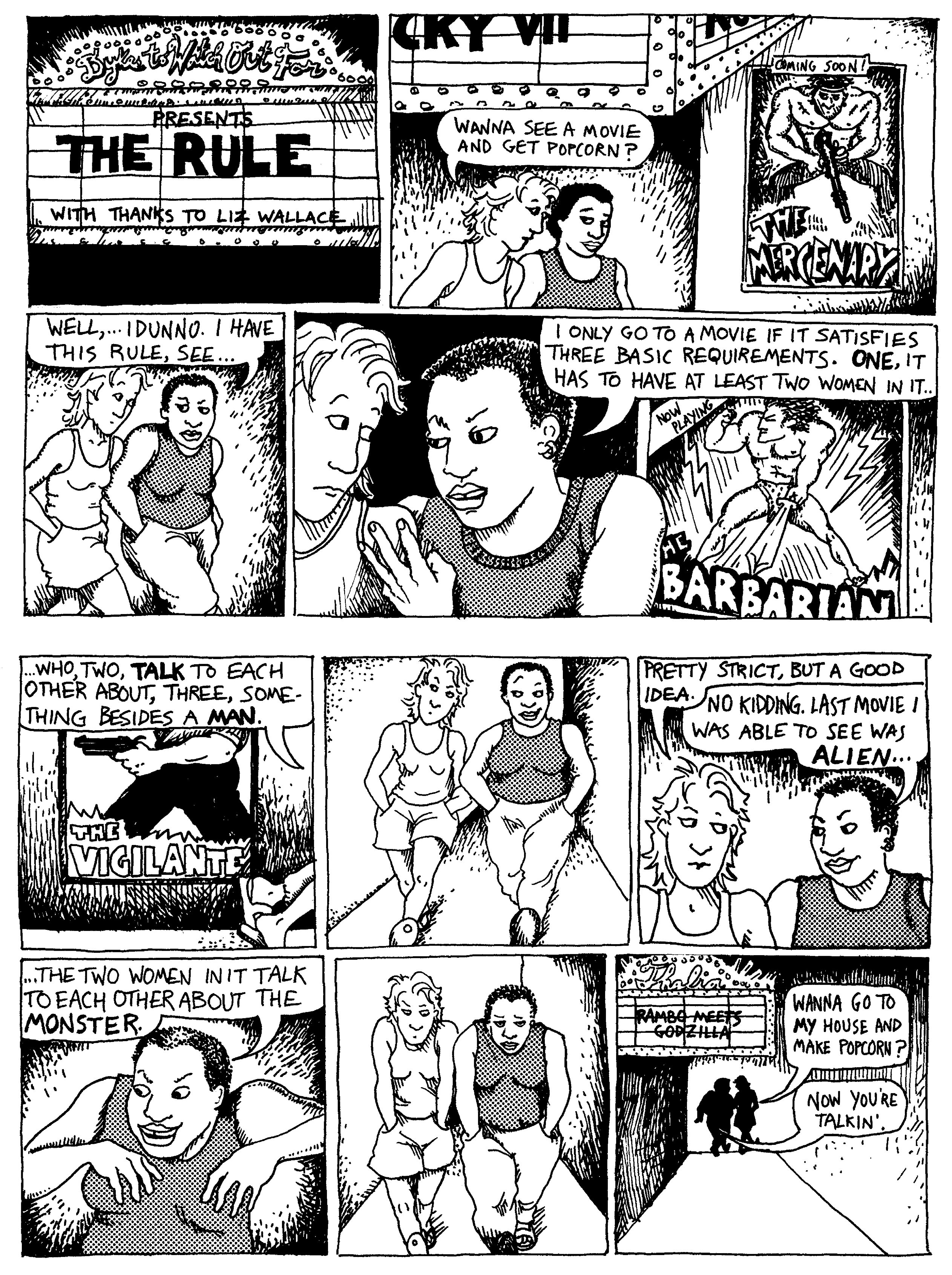