‘Be Angry At The Sun’ begins with another quote but this one is less well-known. It appears the writers aim to be literary rather than revel in their assigned genre. Writers seeking to disassociate themselves with their material will not do well. Don’t just write what you know, write what you love.

These writers have done neither.

Nor, it appears, have they bothered to consult with any of the agencies mentioned in the series. I’m sure CDC authorities cringe at the ignorance of ‘their’ officials on the series. Homeland Security are either headdesking or rolling in the aisles at the rank stupidity of sending Carnahan (David Gyasi) to ‘talk’ to a blogger, asking him nicely to shut down a website that is provoking violence in a crucial period of distress instead of doing the obvious: shut down telecommunications between the quarantined area and the outside world except through authorised channels and shut down the blogger’s website.

Dr Victor Cannerts (George Young) says, ‘I’m the only doctor with access to the virus’ because, apparently, this multistory hospital only has ONE doctor on site?

Did all the other doctors just vanish? NO ONE else was on duty when the cordon went up?

Apparently the doctor needs more rats and can’t possibly make any progress researching the virus without more rats. He also sits in a clerk’s office without gloves or any lab equipment to, y’know, DO RESEARCH. His role is as administrator, video conference calls with outside and the occasional walk down Isolation Room Alley, admiring the inmates from the safe side of the glass. And he does autopsies, at least until he delegates searching bodies for evidence to Jake.

Bert (Charles Black), who guy who looks after the rats, has to go back to work after a short visit with his wife or the doctor won’t have any rats to experiment on. What does Bert do? Shit rats? Because him going back to work won’t magically make lab rats appear from nowhere.

Major Carnahan argues with Dr Lommers (Claudia Black), asking to send in 50 more police officers. No one outright says, ‘You would be sending them to their deaths. Here, look at photos of how they’d die.’ Dr Lommers has, previously, been rather brutal and authoritarian and yet her refusals lack punch.

Carnahan wants to use a shipping container as a ‘sluice’, a gateway and quarantine zone. Apparently he wasn’t paying attention during the pilot when an electrified fence was installed THEN shipping containers were added as a second line of defence. How could the door be opened OUTWARDS into the ELECTRIFIED fence? They cut a hole in it? On the inside? First they’d have to turn off the current, leaving a non-electrified fence as a convenient ladder for escapees to climb up onto the containers.

Speaking of convenient: in the first zode there were a couple of images where — I thought — the barrier had two fences with a no-mans-land between. They were too close together but, I thought, there was a double barrier. Since then all images have been of a single barrier without a no-mans-land. Now some journalists on the inside have found a fire ladder to a roof that would be an allegedly ‘easy’ jump to the containers. They, along with the outside blogger, decide to ‘tell people the truth’, thus helping potentially contagious people escape, enabling the virus to ravage the rest of the world. Because they’d be famous and be able to ‘write [their] own ticket’ — but not out of the grave. One of the women coughs. She’s got the bug.

The final scene that I watched was where Major Carnahan and Jake were both inside the same shipping container having a cosy chat AFTER Dr Lommers refused to use the shipping container as a gateway. Carnahan brought presents because the US is completely incapable of using helicopters or even cherrypickers to drop supply packages into the quarantined area.

Did I mention that shopkeepers are jacking up prices, people are on shopping sprees to stock up but the shops still aren’t bare? I guess shops staying open gives the ELEVEN officers inside the quarantine area the opportunity to follow their orders: to patrol ATMs, banks and shopping areas to prevent looting. ELEVEN officers. TWENTY-FOUR/SEVEN. In a zone with 4000 people held prisoner and potential death sentences looming over everyone.

Episode 3 was the last episode I’ll watch and I couldn’t even finish it. My partner doesn’t do the peanut gallery usually: he wants to immerse himself in a story or, if it’s stupid, he gets angry. Hurling insults at the screen and laughing at Prometheus-style stupidity doesn’t appeal to him. I hit the ‘stop’ button when Jake and Alex Carnahan were in the container together because PLOT SHATTERED BEYOND REDEMPTION. Did they even bother to review the previous two episodes before writing that one? Aargh.

Containment is based on Cordon, a 2014 Belgian Flemish-language drama series in 10 parts. Cordon was written by Carl Joos, directed by Tim Mielants and produced by Eyeworks (Wikipedia). Cordon gets no less than 7.5 out of 10 and up to 8.5 out of 10 for every rating so it looks like Containment is another grossly inferior US remake, replacing drama with melodrama, science with stupidity. Remember Life on Mars? I loved the UK series but I only lasted 2 or 3 episodes of the US remake because they Just. Did. Not. get the relationship between Gene Hunt and Sam Tyler. Later I heard how it ended and was REALLY glad I hadn’t sacrificed so many hours of my life to watching such trite crap. Containment has the same problem.

Someone please send a dubbed version of Cordon. THAT I will watch. 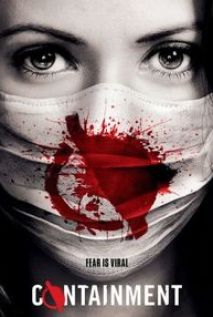