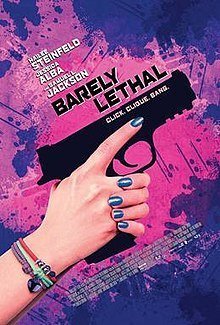 Agent 83 aka Megan (Hailee Steinfield) is a barely lethal ‘Prescott Girl’. The US government raised her in a secret facility, training her to become an assassin. She helps take in Victoria Knox (Jessica Alba) but on the way has a fall that should have killed her so she seizes the day. And goes to high school. As an international exchange student from exotic Canada.

An ode to pop culture

Barely Lethal is an ode to movies like Pretty in Pink, 10 Things I Hate About You and every other iconic teen movie from the past 35 years, combined with the humour and gadgetry of movies like Spy Kids, Alex Rider and Mr and Mrs Smith.

The special effects and green screen done so badly that the overpowering flavour is that of cheese. This might have been a conscious decision, or creators may have blown the budget on the perfect pop culture cast.

Agent 84, Megan’s nemesis and life-long competitor slash rival sister, is played by Sophie Turner (Sansa Stark from Game of Thrones), while Victoria Knox, the arch villain, is played by Jessica Alba who played Max in Dark Angel, a kick-ass assassin who was also raised in a school for child assassins. Mrs Larson, the exchange student mom, is played by Rachel Harris who played Doctor Linda in Lucifer. And Samuel L Jackson has been in too many movies to count. The cast is a casting banquet, perfect for this type of cheesy funny romantic teenage rebellion.

What Barely Lethal lacks in originality it makes up for with its overt pop culture references, embracing the cheese and not taking itself seriously. It’s a fun movie that follows the tropes providing some fun along the way. IMDB rates Barely Lethal as 5.4 stars while Rotten Tomatoes gives it 26%; usually anything this low is ‘viewer beware’ but this time the rating seems harsh. Perhaps the fanboys were all “Girls, get off our lawn”. I’m giving Barely Lethal 3 out of 5 stars.