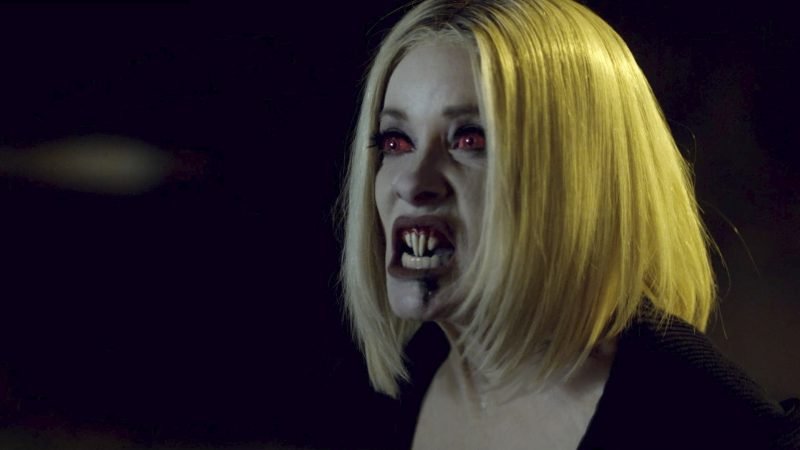 Cult icon and horror legend Barbara Crampton built a formidable career in a tough industry, and a dedicated fanbase. Jakob’s Wife is her latest starring role. And Barbara also produced the film.

Barbara made her TV debut with a recurring role on Days of Our Lives, followed by a brief but memorable role in Brian De Palma’s Body Double. She achieved enduring cult popularity as college co-ed Megan Halsey in Stuart Gordon’s Re-Animator. And, after making a splash in the horror genre, successively starred numerous titles including From Beyond, Chopping Mall, Puppet Master and Castle Freak. Outside of horror, Barbara had recurring roles on Guiding Light, The Bold and the Beautiful and The Young and the Restless for which she won a Soap Opera Digest Award.

Years after retiring from acting to raise a family, Crampton returned to film in 2011. She appeared in You’re Next then The Lords of Salem, We Are Still Here and Beyond The Gates. She also recently starred in horror anthology In the Dark for Hulu, Creepshow for Shudder. And next she will appear in apocalypse Xbox game Back4Blood.

Featuring a joyous central performance from Barbara, who skillfully weaves in her own remarkable off-screen journey through horror history, Jakob’s Wife is a full-bloodied rallying cry to grab life (and death) by the throat and reclaim your place in the world in all its gory glory.

Anne is in her late 50s and feels like her life and marriage have been shrinking over the past thirty years. Through a chance encounter with a stranger, she discovers a new sense of power and an appetite to live bigger and bolder than before. However, these changes come with a toll on her marriage and a heavy body count.

Jakob’s Wife will stream exclusively on Shudder from Thursday 19 August.

In this podcast Nalini talks to cult icon and horror legend Barbara Crampton. Barbara built a formidable career in a tough industry, with a dedicated fanbase. Jakob’s Wife is her latest starring role and she also produced the film. Jakob’s Wife features a joyous central performance from Barbara, who skillfully weaves in her own remarkable off-screen journey through horror history. It’s a full-bloodied rallying cry to grab life (and death) by the throat and reclaim your place in the world in all its gory glory.

Please tell us about Jakob’s wife.

I love the idea of a middle-aged woman refusing to become invisible; how much of this story is your personal rebellion against society’s expectations?

Apparently this story is somewhat autobiographical; can you tell us about that?

You star in Jakob’s Wife as well as producing it; what was it like wearing those two hats? Did it ever create a conflict of interest?

What do you think the difference is for men and women working in the horror genre? Do the fans react differently?

If you enjoyed this podcast…

If you enjoyed this podcast, then I recommend this short interview with Paula Brancati. And this slightly longer podcast with Larry Van Duynhoven discussing working as a prosthetics guy on renown horror shows. In this discussion I mention that romance gets a bad rap although many romance writers passionately argue romance is a feminist genre. This topic and others is discussed on Romancing the Reader with Anne Gracie, Sarah Mayberry and Kate Cuthbert.