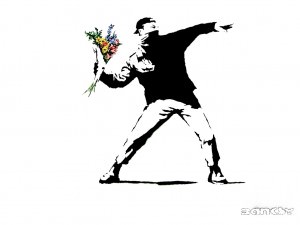 Who is Banksy? This is the big question on everyone’s lips. Banksy is a street artist or vandal depending on your point of view. Banksy is an active graffiti artist based in the UK, who has worked in Europe, Australia and the USA. In 2006 Banksy had an art exhibition (Barely Legal) in the USA with high profile celebrities attending and a media feeding frenzy that included Banksy’s own film crew being told to move on by another crew.

Wikipedia cites Tristan Manco as an authority on Banksy. Manco says Banksy was born in 1974 and grew up in Bristol, where his work was first based. The Daily Mail claims that Banksy was born in 1973, so while there is no agreement there is a general consensus regarding Banksy being mid to late 30s at this time. Banksy started work as part of the DryBreadZ crew (DBZ) as part of the Bristol underground scene. Wikipedia also says that Banksy’s message is usually anti-war, anti-capitalist or anti-establishment, but omits that Banksy’s works include pro-environment, social justice and pro-reconciliation messages.

In Banksy’s book Wall and Piece (Random House 2005), he talks about an incident that occurred when he was 18, leading to stencil work. Banksy is male and probably white as it is less likely that he would have evaded the police so successfully during such an active career if he was coloured. It is also likely that Banksy comes from a financially comfortable background as he had the means to access spray cans and develop stencils. I suspect Banksy attended art school, possibly through to graduation or even beyond as he has a good understanding of the art world, its politics and also its requirements to ‘justify’ one’s work and reference one’s work within the art world. I love the idea that Banksy works as an arts lecturer somewhere, exhibiting to modest recognition and being derided by the same people who lavish praise on his alter ego. 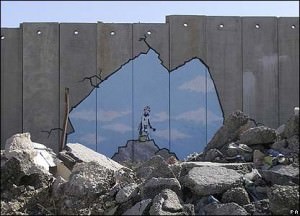 I first heard of Banksy some years ago at art school after he painted on a wall in London, which was promptly sold for an astronomical figure. Since then I bought Banksy’s book Wall and Piece when I was in a bookstore that actually had it in stock. I brought home my prize, yet another art book to the disgust of my teenage son (MTS). I insisted MTS look at the book. He could not believe it! Since then MTS has followed Banksy’s activities and gives me updates. Wall and Piece includes many images of Banksy’s work along with some text background to his activities such as his narrative about painting the West Bank wall. I can’t name a favourite image – is it the ‘Mind the shit’ sign on the steps of the Tate (art museum)? The anti-war signs at the protest march? The subversion of traditional art by adding (variously) an ipod, bomb pack, police tape and so on?

Recording graffiti art is definitely a plus and a problem, as the artist needs to exit promptly to avoid police while a photographic record may be the only permanent record of the art. For example, Banksy painted in the Barcelona zoo, only to find his work had either been removed or was already covered with sheets of plastic when he arrived to take photos the following afternoon. As Banksy said, ‘It’s frustrating when the only people with good photos of your work are the police department.’

Exit Through the Gift Shop is a mockumentary focusing on Thierry, a camera enthusiast who films Space Invader and assisting with Invader’s graffiti. Thierry tells Space Invader and the other street artists that he is filming a documentary about street art. Thierry becomes obsessed with filming the street art, and eventually becomes obsessed with meeting and filming Banksy. Banksy contacts Thierry through Space Invader, thus Thierry becomes Banksy’s accomplice and camera man. Exit is a cross between a mockumentary on street art, its rise to respectability and a scathing satire of the art world. 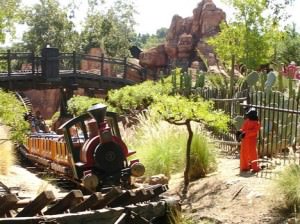 Banksy’s Guantanamo Bay figure in Disneyland was real, but apparently they didn’t get into nearly as much trouble as Exit portrayed. Similarly, Exit showed Banksy painting the West Bank wall, but in reality the soldiers were not visible to Banksy. According to Banksy’s account in Wall and Piece, Banksy’s driver told him it would be fine because it was the wrong season for soldiers. When Banksy returned to the car after doing the art work, apparently the driver was laughing hysterically because the towers were manned with snipers – unbeknownst to Banksy.

In Wall and Piece, Banksy says, ‘Art is not like other culture because its success is not made by its audience. The public fill concert halls and cinemas every day, we read novels by the millions, and buy records by the billions. We the people affect the making and the quality of most of our culture but not our art. The Art we look at is made by only a select few.

A small group create, promote, purchase, exhibit and decide the success of Art. Only a few hundred people in the world have any real say. When you go to an Art gallery you are simply a tourist looking at the trophy cabinet of a few millionaires.’ In Exit Through the Gift Shop, Banksy expresses his views on art in a highly entertaining way that is accessible to those to whom the art world is not accessible.

On 2 November 2010, Exit won the most entertaining documentary award, given by
Grierson Trust British Documentary Awards. Judge Chairmain Emma Hindley said the verdict was unanimous; ‘It’s a flawlessly made film; original and insightful. It asks questions rather than telling you what to think and at the same time, manages to be very, very funny.’

After seeing Exit Through the Gift Shop, The Simpsons’ executive producer Al Jean approached the producers of Exit to contact Banksy with regards to doing an intro for The Simpsons. While Banksy did not actually animate the intro himself, he provided storyboards etc to enable The Simpsons crew to create the Banksy original. This intro begins with Bart’s traditional writing on the blackboard, which says ‘I will not write all over the walls’. Not surprisingly, the walls are already covered with the same lines. The semi-usual events happen until the Simpson family is sitting on the couch, then it switches to a sweatshop in Korea where Simpsons products are being made by depressed workers and abused animals. 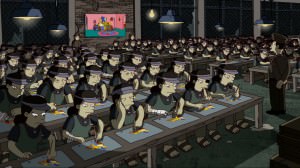 Al Jean says that the Fox network is tolerant of jibes at itself, and the intro is mostly as Banksy devised. When asked if he was sure the work was done by Banksy, Al talked about the high standard of artwork and presentation as well as the fact that Banksy has taken the credit.
The Simpsons intro went viral almost immediately upon release, able to be viewed as part of news articles around the globe including in news networks in the UK, USA and Australia. Within 24 hours the intro was removed from YouTube, but is still available for viewing on Banksy’s website [that url is no longer functioning, but Bansky Film has put the intro back on YouTube].

Sources for this article:

Banksy’s website, Wall and Piece (Random House, 2005); Exit Through the Gift Shop (Paranoid Productions & Madman), YouTube, Wikipedia, news articles from BBC, the Guardian, The Age, Fox and various websites.  (I couldn’t embed links when I wrote this article so I’ve lost a lot of the urls I used.)

This article was previously published in Dark Matter issue 2, January 2011, and predated on this website to reflect the original publication date.