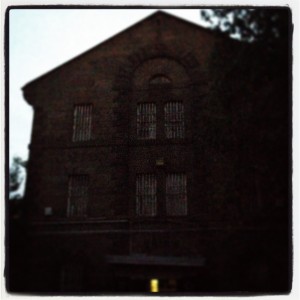 A review of a play by C J Dee

It’s a Friday night in Geelong as the sun creeps into the horizon. I wait outside the Old Geelong Gaol until the towering gates creak open. The waiting crowd trickles through the gates and congregates in the Gaol’s courtyard. As we wait in the courtyard for admittance to the Gaol’s main building, a bird in the sky catches my eye. No, not a bird, they’re all tucked into their nests by now – a bat. Then another, and another. Suddenly a seemingly never-ending stream of bats are flying silently overhead. 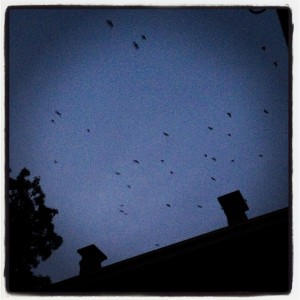 I am the first granted entry to the Gaol’s main building and walk through the deserted hallway with my footsteps echoing. The doors to exhibits have been left open and the lights on so I peer through the doorways to catch a glimpse of the historic artefacts on display at this 150 year-old prison. I don’t stop walking though and reach the end of the corridor to be welcomed by a darkened cell block resonating with what sounds like a Gregorian chant. At the end of the block, nestled snugly between the opposing cells is a stage, lit menacingly by red lights.

I choose a seat in the second row and have just managed to nestle in comfortably when Alphonse Cheese-Probert hobbles onstage through a lock-door to the right of the stage, his eerily white face smattered with blood and cuts, his eyes surrounded by dark circles and his blackened teeth exposed. Lady Sophronia Lick-Penny slinks in from a matching lock-door to the left of the stage and is quickly poised behind a screen from which to perform the soundtrack of the evening. Only her face is left exposed with a make-up similar to Alphonse Cheese-Probert’s, replacing the blood and cuts with dabs of lipstick in the centre of her lips. With the aid of his cane Alphonse Cheese-Probert makes his way to the chair at the front of the stage and sits, staring into the crowd.

Alphonse Cheese-Probert demands the doors be locked. The slam of a door and metallic click of a lock echo throughout the hall. The patron to my left jumps and the one seated in front of me tenses. 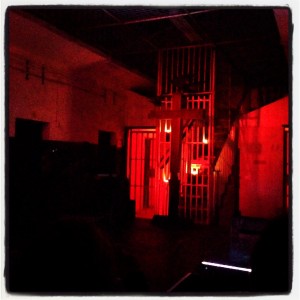 It is here that the real story begins. Alphonse Cheese-Probert presents the story of Dr Marroc Corvus Rapere, a plague doctor with a haunted past, a tragic present and a doomed future. The story is narrated in one act and accompanied by the remarkable soundtrack and effects created by Lady Sophronia Lick-Penny from behind her appropriately decorated screen.

I imagine Ballad of the Plague Doctor as very similar to what would have happened if Edgar Allen Poe and William Shakespeare had ever collaborated and set their resulting play to a superbly fitting soundtrack. The result was an hour and a half of story-telling and ambiance so well delivered by The Laudanum Project that there were times I could almost reach out and touch the medieval buildings, streets and people (although I wouldn’t – what with them being all plague-ridden and all). 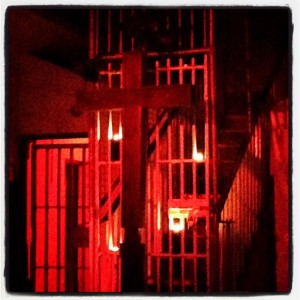 I love the theatre and have been lucky enough to see some brilliant shows but I had never before seen a horror show at the theatre. Unless you count the Rocky Horror Picture Show. I wasn’t sure what to expect but made sure not to sit in the first row in case there was blood splatter. The show was nowhere near that gaudy and I was pleasantly surprised to find an intelligent show that allowed me to use my own imagination to form the events that were occurring. As anyone who reads and watches horror knows the images your own mind can create are often much more terrifying than what a screen will show you.

Somehow, through all the macabre descriptions of horrific deaths, plague and tortured souls, The Laudanum Project have managed to do one of my favourite things in horror. They’ve added humour. Is it dark humour? Probably, but there was also a well executed fart joke that broke the tension that had built in the audience. Horror and comedy may seem like unlikely friends (unless you watch as many B-grade horror movies as I do) but when you’re working in suspense it can often be the greatest marriage of genres to relieve tension and leave your audience guessing.

The scant set added to the ambiance by making you focus solely on the storyteller although Alphonse Cheese-Probert’s storytelling was so engaging there could have been a three-ring circus in the background and I would have remained captivated by Ballad of the Plague Doctor.

Pet peeve: Whether you’re going to the theatre at Her Majesty’s Theatre, Old Geelong Gaol or in your Great-Uncle Barney’s backyard – please put your phone on silent. No one wants their experience disrupted by your cheesy ringtone so don’t be that guy/gal.