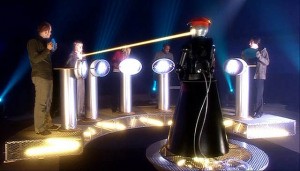 Of all the episodes this season, ‘Bad Wolf’ is possibly the most memorable. ‘Bad Wolf’ is also the beginning of a two-part story, concluded in the following episode.

The Doctor (Eccleston), Rose (Piper) and Captain Jack (Barrowman) wake up, disoriented, to discover themselves trapped individually in warped futuristic versions of reality TV shows: Big Brother, the Weakest Link and Trinny and Susannah’s make over.

As each progress through their respective games, they discover they’re playing for life or death. The stakes just got higher.

My personal favorite part is where Captain Jack’s clothes are defabricated during his makeover: he’s sassy, not just insouciant. Captain Jack’s predilection for ‘dancing’ has been firmly established. In ‘Bad Wolf’, Captain Jack comes on to the female androids, placing his hands in what would be extremely inappropriate places had the droids been real women. Trinny and Susannah are not amused.

The stakes are ramped up further by the end of this episode.

I’m rather ambivalent about the Dalek focus in New Who, especially reports of their demise being exaggerated, but the special feature on Design in Doctor Who was fabulous, showing how they created the sets, the Supremely Insane Dalek and more. I highly recommend watching that special feature AFTER you’ve seen the whole season, though, because otherwise SPOILERS.

‘Bad Wolf’ is a must-see episode if only for the comedy. I love seeing reality TV spoofed, especially in conjunction with satirizing its sheep-like audience. Highly recommended.