The Chronicles of Kaya book 1

Avery is 25 years old when he dies during an assassination attempt: they were trying to kill the queen of a neighbouring kingdom. Avery and his girlfriend, Ava, are the ‘good guys’ though: the Barbarian Queen promotes violence and bloodshed as a way of life.

In the country of Kaya, every pair-bonded couple dies together or the survivor commits suicide. Ava did neither so she’s cast out from her people. Her hatred drives her to try to murder the queen again (disguised as a boy called Avery) but she’s captured and sentenced to imprisonment on a distant island. Prince Ambrose accompanies him to ensure he’s delivered to the island, a punishment from his mother for visiting his father’s tomb.

A shipwreck, adventure and rebellion ensue.

I feel ambivalent about Avery. My concerns fall in two main categories: firstly, feminist issues including (but not limited to) violence, domestic violence, rape, sexual assault and assigned responsibility for all the preceding. Not to mention McConaghy’s use of imagery related to albinism. Secondly, plot holes.

Ambrose realise he’s fallen in love with Avery, the boy Ava pretends to be. Ambrose is mildly disconcerted about realising he’s gay because it’s not accepted practice but he’s more concerned about whether Avery might feel the same. Although I like the same-sex attraction and negotiation aspect of this romance — and I’m sure many people identify —Ambrose’s people’s violence against queer couples reinforces prejudice. Even Ava/Avery says that it is rare for same-sex couples to bond in her/his country.

Ava/Avery can be read as a trans character although, sexually, her/his attraction is consistently towards men.

McConaghy pits two countries against one another in a generational war that has no remembered cause. The Kayans are relatively good people, largely victims, who run border skirmishes and attempted assassinations in the expectation that killing the queen will change Pirenti culture. This idea remains unquestioned throughout the novel. In contrast, Pirenti men and the queen murder Kayans in war and ritually, as prisoners of war.

The queen uses mass executions to control her eldest son, Thorne, who ‘can’t help himself’ because he’s a beserker with ‘a beast’ inside him that wants to kill everyone all the time. Apart from the smell of blood sending Thorne into a murderous rage it’s unclear how the queen controls him via these blood-lettings. Because plot.

At the end, it turns out the queen is responsible for a culture of domestic violence. One woman ruling a country with an iron hand causes men to beat up their wives, who live in fear. Oh, except for Thorne, who can’t help it because he’s a beserker so his wife has to take responsibility for bringing him back from a beserker rage. Everyone pity the poor wife-beating murderer because, deep down, he’s actually a loving husband. Very, extremely, deep down. Can you hear my teeth grinding?

Roselyn has obsessive compulsive disorder (OCD), as evidenced by her counting everything, especially in times of stress. At one point, she explains her fear of water: her father tried to drown her because of her counting. The only person to challenge Roselyn’s (self) victim blaming is her violent husband. There’s no comment that it’s likely Roselyn’s OCD was caused by living with an abusive father who then tried to drown her because of the OCD.

When Roselyn and Thorne need to swim to safety (a plot device and, in my opinion, a plot hole), Thorne urges Roselyn to trust him to keep her safe. This is the guy who, in a rage, throttled her, leaving massive bruises on her neck, who has beaten her, imprisoned her, told his mother to execute her, and so on. But it’s ok because she loves him and trusts him so Roselyn goes from not being able to get in a bath to holding on to his back while he swims them both to safety. Grind, grind, grind. My teeth are nubs of their former selves.

Pirenti men rape Kayan women as soon as look at them, before during and after torture. Ava disguises herself as Avery, a man, so the Pirenti won’t rape her if she’s caught. Then she suddenly has a dress and runs to a ship full of Pirenti and climbs on board dressed as a woman with her hair down so they strip her and brand her and torture her. We’re spared actual rape scenes; I don’t think she’s actually raped although she lives under the shadow of imminent rape while a Pirenti prisoner. This is very Game of Thrones and is one of the least palatable, most off-putting aspects of Game of Thrones. I suspect it’s why the books and the TV series ratings are declining. Women may excuse Trump’s ‘Grab ‘em by the pussy’ comment as ‘boys will be boys’. Even Trump hiring sex workers while married may seem titillating. However, I don’t think any politician in Western society would last long if he starred in rape tapes released by the media. There are some lines you don’t cross. Likewise in fiction.

Roselyn isn’t allowed to go into the common room in the Pirenti fortress because the men there will grope her and sexually assault her, SO IT’S HER FAULT IF SHE GOES THERE. So says Thorne and their culture. Thorne punishes Roselyn for going into the room and being assaulted. Thorne defends Roselyn because she’s his property and no one is allowed to violate his property. Although there is some degree of enlightenment by the end of the book, there is too little on the way through.

During a festival, women stay indoors because they ‘know what to expect’.

What is that whistling sound? It may be steam escaping my ears.

I chose this trilogy because the third book cover, Isadora, features an albino-type girl. I’m reading anything and everything relating to albinism and albino types released in the past 10 years for my thesis.

Ava “was famous for her [blonde] hair” (2013, p. 3) and says her eyes are currently violet but that “They shone a bright purple when I was angry and they went red when I was furious” (2013, p. 14). Her eyes also go white when she’s filled with hate. People with albinism tend to be blonde although they can have red or even brown hair. Eye color can also vary significantly but colors from violet to red mean the albinism is significant (less pigment than me!); a person with violet eyes would probably be legally blind and with red eyes could be totally blind. No one in Avery has any vision impairment.

To McConaghy’s credit, the Kayan people, with their often-blond hair and varicolored eyes, are ‘good people’, mostly victims in this war. However, red eyes indicating anger and white or colorless eyes indicating hatred reinforces prejudice. Luckily, even among people with albinism, red eyes are extremely rare.

Unlike Twilight, Avery’s leading female protagonist has considerable agency. Also the culture of abuse is challenged to some degree by the end of the novel. However, the Pirenti queen is blamed for a culture of abuse, absolving men en masse of their responsibility. Despite these dynamics, I think the most appealing contrast to Twilight is Avery’s message that there is life — and love — after losing a great love.

As an ally, I hesitate to commend Avery to the queer community and yet, like Alison Goodman’s Eon/Eona character and dulogy, Avery can be read a positive trans character.

Avery starts as a new adult romance (it has a few sex scenes) but finishes as straight-up melodrama. Enough said? No? Ok, I’ll just list a couple of plot holes to give you an idea.

Ava goes for well over 24 hours without urinating.

A ship suddenly sinks — we don’t know why.

Ava/Avery and Ambrose are taken prisoner and aren’t allowed out of their rooms so they climb out of their windows to reach each other. Repeatedly.

A one-way trip to the island takes days via sea and even longer for a riderless pegasis (not a typo) but the flight back took mere hours with two riders. There was a logical and preferable alternative but ‘because plot’.

I struggled with Avery and yet Isobelle Carmody likes the series so much she’s blurbed the 3rd book. I was wary when reading because I expected to be confronted with monstrous albino-types and relieved when this was less of an issue than other feminist concerns. Pirenti people are violent towards queers but Ava/Avery is a trans character. Avery’s focus on violence, especially domestic violence and sexual assault, makes the book a challenging read, deserving of trigger warnings. The messages therein are, at the end, positive but much of the story is victim-blaming. Some people will love and adore this book and possibly see role models, even aspirational role models, in either Ava/Avery or Roselyn. Others may find the story triggers PTSD (Post-Traumatic Stress Disorder). Although Avery has more depth and poses greater challenges to the reader and reviewer than Twilight, I feel somewhat ambivalent. Perhaps this very fact commends Avery to book clubs and teen literary discussion groups. 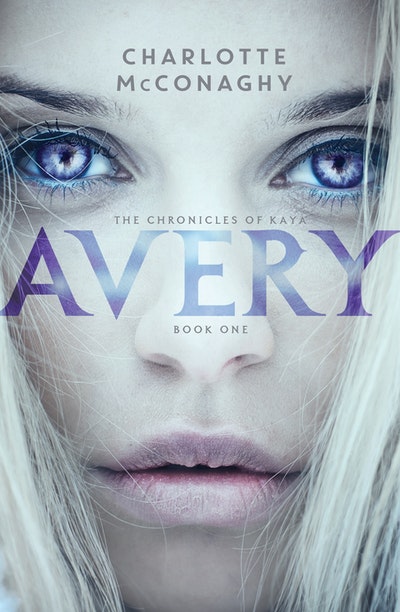