This guest blog features Danie Ware, an author auctioning a cameo role in her next WarHammer 40k Sisters of Battle story for her auction winner. This is an auction item to raise money via #AuthorsForFireys for the fire fighting effort here in Australia. The full set of #AuthorsForFireys interviews and blog posts will be here as soon as they are published, as interviews and guest blogs for #AuthorsForWildlife will be here. 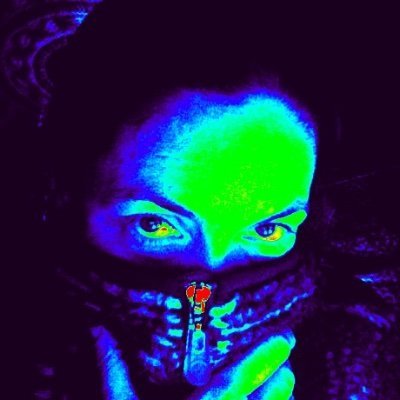 Danie Ware looks like she’s wearing a breathing mask although it does not look like an Australian government-issued P2 breathing mask.

Meet Danie Ware, who says she is:

“I juggle my writing and raising my son with conjuring events and social media for Forbidden Planet, London. Any spare time is usually spent in the gym.”

“Guess I hadn’t twigged that I’d be in my fifties (seriously, how the hell did that happen?), juggling a teenager and a writing schedule and a job that’s taken me to some weird and wonderful places. And I certainly hadn’t realised that I’d have given my black leather longcoat to my son.”

Danie lives way way over in Brexit land but she donated an item to the twitter auction to raise money for the Australian firefighting effort.

If you fancy meeting (or dealing) a suitably 40k demise, the bidding is currently at AUS150! https://t.co/x1VxiP97uR

For #AuthorsForFireys… A named cameo in the #warhammer40k #SistersofBattle MS I’m currently writing If you fancy meeting (or dealing) a suitably 40k demise, the bidding is currently at AUS150!

A cameo role in my next WarHammer 40k Sisters of Battle story.

If you would like the chance to die bloodily or gloriously, for the Emperor or against Him, as part of the Sisters or trying to take them down – or to froth at the forefront of the forces of Ruin – now’s your chance!

I am auctioning one cameo role in my next Sisters story, all proceeds to the #AuhthorsforFireys appeal.

The auction will close this Friday, 10th January

Once you’ve suppled proof of contribution, I will have a quick chat with the winning bidder to find out what you would like to do/be, and how this best fits with the narrative and canon.

Yes, it is legit. The whole community — Australian and global — is rallying together to support Australian firefighters, wildlife rescue and bushfire victims. Here are some reports on this effort.

The #AuthorsForFireys auction will take place only on Twitter from Monday 6th January, ending at 11pm AEST on Saturday 11th January. Scores of authors, illustrators and book industry people will host their own individual auction under the hashtag #AuthorsForFireys and bids will take place on each tweet. At the end, the highest bidder donates the amount directly to the firefighters fund. After receiving proof of donation, the author or artist will dispatch goods/services or make arrangements for delivery.

As originally wanted by @EmilyGale and @NovaWeetman, this fundraiser is now officially for ALL fire services in Australia. The official Authors For Fireys Website will be updated accordingly. Winning bidders or auctioning authors can nominate funds to the fire service of their choice.