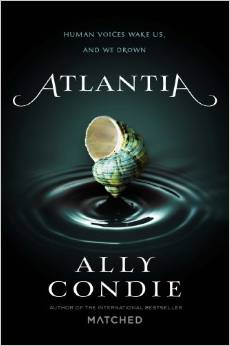 Can you hear Atlantia breathing?

For as long as she can remember, Rio has dreamt of the sand and sky Above – of life beyond her underwater city of Atlantia. But all her plans for the future are thwarted when her twin sister, Bay, makes an unexpected decision, stranding Rio Below. Alone, ripped away from the last person who knew Rio’s true self — and the powerful siren voice she has long hidden — she has nothing left to lose.

Guided by a dangerous and unlikely mentor, Rio formulates a plan that leads to increasingly treacherous questions about her mother’s death, her own destiny, and the complex system constructed to govern the divide between land and sea. Her life and her city depend on Rio to listen to the voices of the past and to speak long-hidden truths.

When I first heard about this novel I was captivated, thinking that it would be a great mermaid novel set in some sort of dystopian world. I was only accurate about the dystopian world and, even then, just barely.

The people of Atlantia aren’t mermaids, they are human just like those above, but they live in a glass-encompassed city at the bottom of the ocean. At the time of the Divide, people chose to stay above or go below, hence the setting for the novel. The characters were adequate, but I didn’t really feel myself connecting with Rio, I found her naïve, annoying at times and then unnecessarily reckless.

While the novel flowed well and there wasn’t a saturation of romance, there was just something about it that unfortunately didn’t stay with me. I felt upon completion of the novel that it was just another book I had read, none of the details or storylines really stayed with me. The novel peaked almost in the middle and started a steep decline to the end. The same can’t be said for Ms Condie’s previous series Matched.

Atlantia as a whole was enjoyable, but there was something about this novel that just didn’t stick with me. Perhaps it is my age coming out here, but I believe this novel would be more fitting for a younger YA audience.