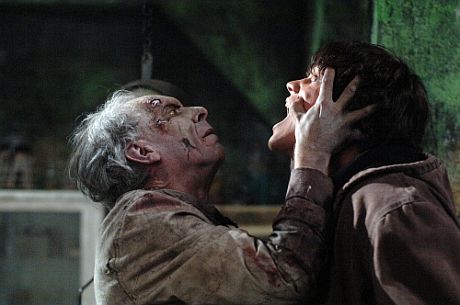 The Peanut Gallery commentaries continue. Bec, CJ and I are watching Supernatural together. CJ is a long-time fan of Supernatural so she’s proselytizing Bec and I. Bec had previously known nothing about Supernatural, assuming that it was a crappy Vampire Diaries (or something similar) rip off and refusing to watch it. Then one of her other friends told her that it was basically like Charmed but with penises, at which point Bec was all, “Sign me the hell up, bitches!” Nalini wanted to watch it and watching with friends increases enjoyment exponentially.

Police officers park their car and find a lock and chain that were cut to gain entry into a derelict former asylum. Searching, they keep calling “who’s there”.

CJ: It’d be really funny if a ghost popped up and said, “Ghost!”

CJ: Everything happens in a boiler room. Freddy Krueger should pop out and wink then leave.

R: It’d be creepy as hell walking around there. We went to Port Arthur and that was creepy as fuck.

I look sideways at Bec and say nothing. What can I say? “I visited Port Arthur several times as a kid and an adult. Remember that massacre? When I heard, I was like ‘Port Arthur where? Port Arthur in America? Port Arthur in a third world country? Port Arthur WHERE?’ As the news broadcast continued over the radio, it gradually dawned on me that the massacre and ongoing hostage situation were at Port Arthur, an hour and a half THAT WAY.” This shit doesn’t happen in Australia. The animals are deadly enough without arming sociopaths. We now have gun laws. And fewer mass shootings. I digress.

The cops meet up. One of them looks zombified.

R: This is where he realises he’s been pwned.

CJ: Look how creepy he looks. How does his partner not realise he’s all creepy? I would hope my colleagues would notice if I looked that creepy.

The zombified-looking cop wipes blood from his nose on his hand before going home, where his wife complains about him still being mad about an earlier argument.

CJ: Maybe his brains are leaking out his nose.

The zombified-looking cop’s wife gets into an argument with him.

CJ: Don’t sass the guy with the gun.

R: And ESPECIALLY don’t sass the guy possessed by a demon.

The zombified-looking cop wasn’t a zombie. He wasn’t interested in eating anyone’s brains. Instead, he picked up a gun and shot his wife. Then himself.

R: If this show was made in Australia, it’d be “poor cop, he was depressed and provoked”.

Sam receives a text message. Dean assumes it’s from their father, a directive to investigate.

Sam: I love the guy but he writes like frickin’ Yoda.

Sam: Doesn’t it strike you as weird? Texting? Co-ordinates?

R: Of all the things they do, THAT’S weird? Now Beta Brother is trying to emote.

[If Bec’s comment seems a little out of the blue, read our previous review of Home. CJ started the jokes about the brothers emoting. IT’S ALL CJ’S FAULT.]

Sam picks up a cop in a bar after sending ‘reporter’ Dean on his way. To get information, that’s all. [whistles]

CJ: And really not convincing if you know the characters.

R: I’d be a bad demon hunter because I couldn’t climb a fence like that.

Sam climbs the fence and does an acrobatic flip at the top before landing on his feet. The geek girls are awestruck.

CJ: And see that flip at the end?

CJ: Yeah, I’d have to call the fire brigade or something. Like when cats get stuck in trees.

The brothers go into the asylum. There’s a baby doll lying on a bench.

CJ: The fact that its head is missing probably doesn’t help much.

Impersonations and references to Jack Nicholson movies start with One Flew Over the Cuckoo’s Nest but don’t stop there.

CJ: That was a great Jack Nicholson impersonation.

N: You can see where this is going.

Dean: That attitude right there? That’s why I always get the extra cookie!

The facial expressions in the exchange!

Sam visits a psychiatrist to learn more about the asylum.

Psycho— psyche— psychiatrist: This brother that you’re road-tripping with… Tell me how you really feel about him.

The psychiatrist is pumped for information on the asylum during Sam’s session because, conveniently, his father used to work there as the chief of staff.

R: There’s been a movie along those lines.

CJ: At least three. And those are just the ones I can think of off the top of my head.

The brothers leave the psychiatrist’s office.

Teenagers go into the asylum for fun. Sam and Dean investigate for fun.

CJ: They have a weird idea of fun.

CJ: I’d rather do just about anything else for fun.

Teenage boy insists on taking girlfriend into the asylum instead of something romantic or fun.

R: No sexytimes for him.

CJ: He’s going to get broken up with… or just broken up.

CJ: If that were me, I would say I’m going to see the Avengers movie then go home to play WoW. [World of Warcraft] You have fun getting turned into insane ghost chow.

Tension builds. Something squeaks a warning.

R: It keeps squeaking. How would he not notice?

CJ: Why does everyone shake their torch? [When the torch blinks out]

R: I take the battery out and put it back in.

Dean pulls out his Ghostbusters-gadget.

A ghost walks across screen behind Dean. He turns to see nothing and continues on his way.

CJ: [talking to Dean] Come on, go with your gut, you know something’s there.

R: Will they find that kid in a gibbering heap somewhere?

They find the girl in a gibbering heap and have a rock-salt gun pointed at her face.

Dean: It’s alright, we’re not going to hurt you.

CJ: With the shotgun pointed at your face.

Dean, Sam and the girl decide to split up to look for Gavin. Sam alone and Dean with the girl.

N: Splitting up. Totally the way to go.

Dean: Next time you see [a horror movie], pay attention. If you see a house that looks haunted — don’t go in.

CJ: Advice like that is why Alpha brother and I would get along REALLY well.

Dean’s torch flickers. He shakes it. Because that’s proven SO EFFECTIVE every other time he’s tried it.

CJ: Oh, fuck off. Come on, Dean. YOU’RE BETTER THAN THAT!

R: Come on Alpha Brother. You can do it.

The girl becomes trapped in a cell with a ghosty. Dean tries to get in.

N: The door opens the other way.

After the girl faces the ghost, it leaves her intact and the cell door opens. Once reunited, they split up. Again.

N: Because splitting up is the way to go.

Dean, staying to search the asylum: This is why I get paid the big bucks.

N: And it’s got nothing to do with being Alpha Brother.

Sam receives a phone call from “Dean” telling him to go to the basement.

R: If you shake it, I’ll punch you in the face.

Sam shakes it. Geek Girls all groan in frustration and disgust.

Sam goes into the area clearly marked as a danger zone.

R: It’s like setting yourself on fire and saying at least you didn’t cover yourself with kerosene first.

CJ: Don’t look behind the curtain.

Girl: Gavin. If we get out of here… we’re breaking up.

CHEERS FROM THE PEANUT GALLERY.

Girl shoots Dean with the salt-loaded shotgun. He dodges behind a corner just in time.

That’s right, Dean gets shot and CJ is looking at his lips. As if they’re kissable or something. Never mind the pellets to the chest. [CJ: What? He lived.]

The girl and Gavin tell Dean that Sam ran off to find him after a phone call he didn’t make. Dun dun DUN.

Dean finds zombified Sam they talk about how the asylum haunting probably began: Sam’s psychiatrist’s daddy did illegal experiments on the patients, hoping to cure anger issues but making them worse. Ghosts of patients are trying to warn them to get the psycho-psychiatrist exorcised. Meanwhile, Sam is having anger-management issues after experiencing psycho-psychiatrist-daddy’s ghostly therapy.

Zombified-Sam threatens Dean with a gun filled with rock salt. Dean tells Sam that it won’t kill him.

Dean realized Sam was possessed and gave Sam an (empty) revolver and told him to shoot him if he hated him so much.

There’s an echo in here…

Dean is lying on his back after being shot with rock salt.

R: Look how white his teeth are.

N: Did you ever see the Friends episode—

CJ: YEAH! With Ross’s teeth! Dean has nice eyelashes too…

R: I feel like I should carry matches and salt everywhere after watching this show.

N: And rock salt because it’s more effective according to Doctor Who [in the Key of Time zodes, protecting against Stonehenge gestalt creatures]

Dean fights off Zombie-Sam and burns the psycho-psychiatrist’s corpse. The ghost sinks to the floor, becoming a second charcoal corpse.

N: How come there are two corpses?

R: I thought the ghost one would have faded to nothing.

Man-candy in bed with biceps — I mean ARMS — above the covers.

N: So. You flex your biceps in your sleep?