Last year I read How To Be An Academic by the Thesis Whisperer, Inger Mewburn (I recommend her book); Mewburn recommends The Asshole Survival Guide, so I bought a copy. Like all researchers I’m overwhelmed by my researching reading pile, so I didn’t get around to picking up The Asshole Survival Guide until I hit a brick wall due to [drum roll please] assholes. I took a break, read this book, and spent time pondering what Sutton says.

The Guide is written in layperson’s English so it’s easy to absorb quickly and can even be read in the afternoon when your head feels like it’s going to explode if you try squeezing one more factoid in; think Monty Python’s The Meaning of Life:

But mine would be more of a brain explosion all over the HDR office.

Sutton blends a conversational writing voice with researched facts to discuss how to respond to assholes, those people in our lives that make us miserable because they’re busy stepping on others to promote their own interests. That definition is in my words and I may be projecting, but you know the kind: 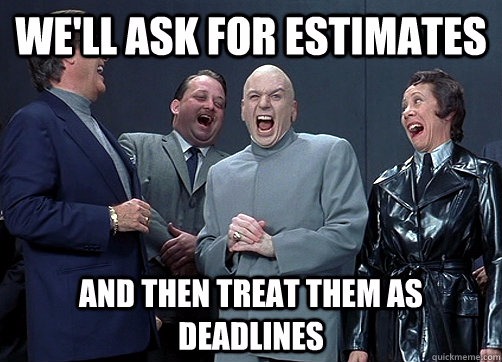 … and lots of other types. I started Googling gifs and memes to illustrate this list then had to STEP AWAY FROM THE INTERNET or I’d be there all day!!!

So, I was stuck in Never Never Land, waiting for this customer service asshole to find time to fit me into his oh-so-busy schedule while I’m reading The Asshole Survival Guide. Sutton provides some specific ideas for how to deal with people as well as lots of cautions about how trying to deal can backfire. Based on Sutton’s options, I figure I’ve been nice for too long. As he says, those who suffer in silence while being nice about it can suffer extreme stress, which affects their lives, relationships and health. Check: this was me. So. Time to be assertive.

I requested assistance or at least an idea of when the dude was going to help me. Dude just said, ‘Please be patient, I’m busy with lots of other things’. What does this mean? That I have to wait until he’s totally cleared his schedule? That I’m in a queue and I might receive help in 6 months? What?

I must have an ‘L’ on my forehead!

Sutton’s words percolated in my brain along with a few gallons of coffee.

I emailed higher up the dude’s employment foodchain, pointing out he’d missed deadlines, REPEATEDLY said he was too busy, and had no start date or plan in progress.

Dude responded by sending a message that he was no longer going to include me in his queue of things to do.

In my opinion, this is an improvement: if his name is attached to the task at hand, he’ll put me on the sidelines while I watch the rest of the world go by. However, with no one assigned to the task, it’s easier to escalate the situation.

Around this time I’d had other problems too, like the guy — let’s call him Dick — who followed me down a street on campus harassing me because I’m disabled. He wouldn’t take no for an answer and wouldn’t shut up. I told him I’d call campus security. I dumped my bag on the ground so I could dig out my phone, then I couldn’t remember if I had their phone number in my contacts, so I took his photo.

AFTER I TOLD HIM I’D CALL CAMPUS SECURITY, DICK WAS STANDING FACING ME, HAND ON HIS HEART, TALKING AT ME WHILE I TOOK HIS PHOTO. Think about that.

Campus security and the dean of students were great. They took the photo and looked at security camera footage, tracked him down and someone talked to him.

After that incident I read the book. I was certain Dick was going to harass me again. With Sutton’s words ringing in my ears, I prepared a few things to say to this guy.

Sure enough, Dick interrupted me talking with a friend after Shut Up And Write two weeks after the first incident. He ‘apologised’. By ‘apologised’, I mean it was one of those ‘I’m pretending to say I “apologise” BUT IT’S ALL YOUR FAULT, YOU BROKEN SICK BITCH’ apologies. Seriously.

This added impetus and fury to my words: I told Dick that if he harassed me ever again I will take out a restraining order against him. I told him that he should never speak to anyone with a disability like that; nor should he ever treat anyone like that.

He responded BY ARGUING WITH ME. Seriously. He told me it’s unfair if I call the police just because he’s talking to me, by which I assume he was saying he planned to continue harassing me on a regular basis. This conversation did not end until my friend told Dick the conversation was over and that he SHOULD. LEAVE. NOW.

I expected repeat performances when I’m alone, so I emailed the dean of students and asked that someone tell Dick explicitly not to come within 20 metres of me nor to ever contact me or communicate with me again.

That was weeks ago. Guess what? I haven’t seen the dude since. At. All. YAY!

(I’m vision impaired. I can’t recognise my partner at 20 metres, so Dick might have been around but what I haven’t seen hasn’t hurt me.)

I admit I was a little annoyed at the end of The Asshole Survival Guide because I wanted a magic wand to fix my problems. Sutton doesn’t ‘do’ prescriptions. He talks about tools, tactics and options. He gives practical tips like keeping a physical distance from Dick because toxicity is like light: it decreases (by a square root) proportionate to the increase in distance. Holding customer service dude to account may result in progress by getting someone else to actually do the job.

I highly recommend The Asshole Survival Guide. Even the most skilled problem-solver can benefit from being aware of the research, how people respond emotionally and behaviourally to various stimuli. (One of Sutton’s quoted facts was very disturbing but explains a lot; it’s influenced my behaviour towards some assholes in my life.) This way my processes in stressful situations can be premeditated, whether it be taking a time out or finding a constructive solution. I’ve spent the past month thinking about all the times my partner and I have used Sutton’s principles to deal with assholes; reading his Guide is a great way of reinforcing previous behaviour and preparing for future events. I think everyone who has an asshole in their life should read this book. There’s always one or, sometimes, there are two.

The Asshole Survival Guide by Robert I Sutton, published by Penguin Random House in 2017.