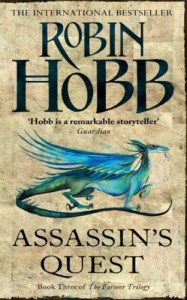 Details for the complete Farseer trilogy, of which Assassin’s Quest is the 3rd and final installment:

Most of all, Fitz resents his uncle Regal whose aspirations are entirely destructive. Between attempts to murder Fitz, Regal had Shrewd murdered then dismantled the country, stripping the Six Duchies of wealth and royal assets while leaving the country vulnerable to raiders.

Chivalry, the King-in-Waiting, left on a quest to find the Elderlings to save the kingdom. When Fitz tries to murder Regal, Chivalry intervenes, imposing an irresistible telepathic instruction for Fitz to ‘come’ to Chivalry.

Instead of finding dragons at the end of the road, the Fitz and his companions find a puzzle that must be solved before Regal’s minions destroy them all.

The Fool confesses his love for the Fitz. Fitz seems a bit homophobic, at least at being the object of male love. The Fool professes a disregard for ‘plumbing’, by which attributes people are so often judged.

Although told from a male perspective, women’s roles and relationships expanded throughout this trilogy. If Assassin’s Quest was a movie, either the Fitz would be in every scene or, I believe, the movie would pass the Bechdel Test by portraying women’s relationships. Certainly the enlightened views of women’s careers in the Six Duchies and the Mountain Kingdom raise Assassin’s Quest to a feminist work superior to the average medieval-style fantasy.

The threads of the Farseer trilogy, Robin Hobb’s first fantasy trilogy, are not as well-woven nor as deep as her later Rain Wilds Chronicles that I reviewed previously. Not having read the intervening stories, I am left wondering if Hobb has rewritten a new, improved canon or if she’s managed a dexterous expansion of her world. Either way, I’m so impressed by the Fool and the Rain Wilds Chronicles that I must read them all. Preferably before I read Fool’s Quest, Robin Hobb’s latest book and the first installment in The Fitz and the Fool series.