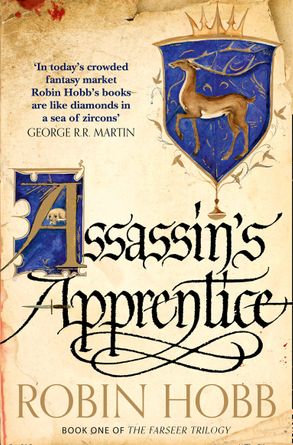 Originally published in 1996, Assassin’s Apprentice is so popular that HarperVoyager released an anniversary edition a few years ago. I originally read this novel in about 2009 or 2010 and I’ve read Hobb’s recent Rain Wilds Chronicles. With the arrival of Fool’s Assassin as a review book, I couldn’t help myself. I returned to this, the first in Hobb’s series set in this fantasy world, for a re-read.

Fitz is the bastard son of King-in-Waiting Chivalry, causing disruption by his arrival into the royal household, aged 6. Burrich, Chivalry’s man, takes on Fitz’s care and training until Fitz is transferred from the stables into the royal keep to be assigned additional duties. Chade, another bastard, teaches Fitz the assassin’s trade.

As the descendent of two bloodlines, the Outislanders and those native to the Six Duchies, Fitz has two magical abilities: the Wit, an affinity with animals reminiscent of Anne McCaffrey’s dragonriders, and the Skill, a form of telepathy.

Galen, the court Skillmaster, loathes Fitz so seeks to either kill or destroy him using the Skill.

Fitz tells the story as an old man looking back across the years. Thus Fitz’s petulance, self-absorbtion and willingness to kill is mitigated, making Fitz a more sympathetic character by applying the lens of wisdom and self-reflection.

The Fool who is, I trust, the Fool of Fool’s Assassin, has albinism. He was given to the king by another court. The Fool is elusive and unpredictable, often speaking in riddles or rhymes. Although the Fool is probably a magical disabled person, I forgive Robin Hobb this trope because the Fool is an awesome character with ethics, integrity, intelligence and undiscovered depths. The Fool is Game of Thrones‘s version of Tyrion Lannister in Robin Hobb’s series. (Update: I’m not as forgiving now that the Fool has changed colour, became a Magical Disabled Person ‘because plot’ and appears to physically change gender at will ‘because magical’.)

Court politics are complicated. Chivalry abdicates as crown prince, replaced by his younger brother Verity. However, their younger half-brother Regal, an obnoxious arrogant upstart of lesser morals and reduced understanding, desires the throne. Less of a spider and more like a pit-bull because of his tenacity and bull-at-a-gate methods of manipulation, Regal is as much a threat to the throne and Fitz as their international enemies the Red Ships, raiding their coast and turning captive citizens into less-than-human creatures.

Although Assassin’s Apprentice wouldn’t pass the Bechdel Test if it was a movie — it’s told from a male point-of-view — representations of gender are interesting. Hod’s appearance and backstory challenge traditional expectations. Women guards may not be common but they exist. Fitz talks about gender roles and the reason women’s influences are largely missing from his life. Kettricken, a woman introduced late in this novel, is an interesting, admirable character as well.

Assassin’s Apprentice sees Fitz grow from age 6 to 15 while the court and its inhabitants evolve around him. Although the novel is 18 years old, Hobb’s storytelling and use of language remains current and engaging. I enjoyed seeing the threads connecting this story to the Rain Wilds Chronicles that I loved so much as well. I’m looking forward to traversing Robin Hobb’s literary journeys that are, as yet, unread. At present I’m re-reading part 2 of this trilogy, Royal Assassin. I recommend Assassin’s Apprentice.