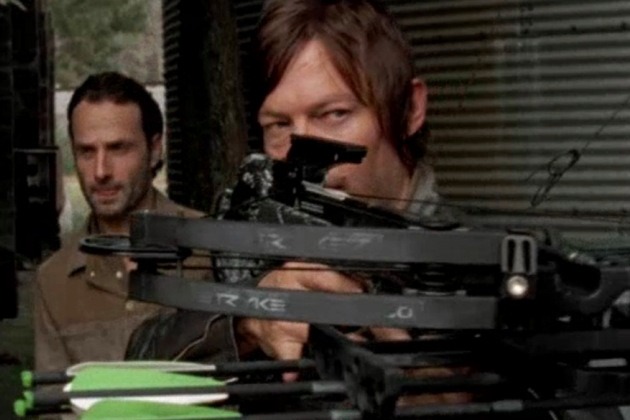 ‘Arrow on the Doorpost’ begins with Hershel (Wilson), Daryl (Reedus) and Rick (Lincoln) at a homestead to meet with the Governor (Morrissey). Rick finds him in the barn while Daryl and Hershel keep watch outside. The Governor tries his smooth routine on Rick, but Rick doesn’t buy it. Hershel and Daryl are met outside by Andrea (Holden), Milton (Roberts) and Martinez.

Back at the prison, Merle (Rooker) suggests they ambush the Governor while they know where he is. Glenn (Yeun) stands up to him and refuses, stating that doesn’t want to risk putting the others in danger.

Merle tries to leave to ambush the Governor despite Glenn forbidding it. Glenn and Merle break into a physical fight with Michonne (Gurira) and Maggie (Cohan) stacking on Merle when he has the upper hand. Beth (Kinney) breaks up the fight by firing a warning shot into the ceiling.

Hershel goes to Andrea. She asks him what happened to Maggie and Hershel replies that the Governor is a sick man. Andrea confides that she can’t go back to Woodbury. Hershel says she is family and belongs at the prison, but if she comes with them it’s settled — there will be war.

The Governor tells Rick that he doesn’t want prison or for them to leave, but he wants Michonne. When Rick questions his motives, the Governor threatens Rick’s children and the rest of the extended prison family. The Governor gives Rick two days to consider.

The groups leave separately and Andrea goes with the Woodbury group. The Governor tells Martinez and Milton to take Michonne alive but to kill the rest of the group at the next meeting. Milton is clearly unsettled despite the Governor’s claims that there’s no way they can live side by side.

Rick admits to Hershel what the Governor really wants. Hershel tells Rick that Michonne has earned her place, implying he made the right decision.

The episode ends with Rick asking Hershel if he is willing to sacrifice his daughters for Michonne.

Rick Grimes is one of the most conflicted and deep characters I have seen on television in a long time. He is quickly becoming one of my favourite characters, not just in The Walking Dead but in general. The portrayal of Rick’s struggle by Andrew Lincoln is spot on every time.

The verbal sparring between the Governor and Rick was intense and incredibly well written, although I am getting pretty sick of people not just shooting this guy when they get the chance. He has destroyed their safe haven, and killed and tortured their own, but still they pass up the opportunity.

When I was flagging during The Walking Dead season two, I was assured that season three picked up. Over three-quarters of the way through it has more than lived up to the hype and ‘Arrow on the Doorpost’ has been one of the best episodes of the season.

‘I’m not showing you my leg … I just met you. At least buy me a drink first.’