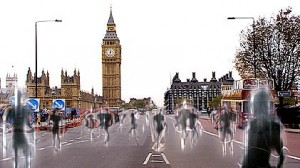 The Doctor (David Tennant) and Rose (Billie Piper) arrive back in London to find Jackie excited about Rose meeting her deceased grandfather’s ghost. An army of ghosts invades the entire planet on a regular schedule. No-one seems worried about this, willing the ghosts to be their lost loved ones.

Meanwhile, Torchwood deliberately activates the ghost invasion on a clockwork schedule, following the director’s instructions. Apparently Torchwood is autonomous, separate even from UNIT; this conflict undermines decades of Doctor Who canon but, if you view this episode in isolation, it seems to work.

The couple disappear into a work area, weaving their way through several vertical layers of plastic sheeting until they meet a mysterious stranger…

Later, both reappear wearing dual earpieces instead of the standard single earpiece.

‘Army of Ghosts’ ends on a cliffhanger, to be concluded in ‘Doomsday’.

This is the first time I’ve seen a responsible professional woman in ‘office wear’ that exposes the underside of her breasts; surely that is, at bare minimum, a disciplinary offense that a responsible professional would never incur. A director tolerating intimate relations within the workplace – even just ‘snogging’ – is unbelievable. With some fans, especially younger fans, looking to TV for role models, inappropriate dress and professional misconduct is a concern.

Apart from these very practical issues that shatter suspension of disbelief, ‘Army of Ghosts’ sets up a fan-service special event to end the season, tying several episodes together in a bow. With bells on.