Danie Ware contributed to the Authors For Fireys fundraiser in January 2020. Emily Gale and Nova Wheetman organised this mammoth undertaking. They raised $513,149 to support firefighters and to help Australia’s bushfire survivors.

“I juggle my writing and raising my son with conjuring events and social media for Forbidden Planet, London. Any spare time is usually spent in the gym.”

“Guess I hadn’t twigged that I’d be in my fifties (seriously, how the hell did that happen?), juggling a teenager and a writing schedule and a job that’s taken me to some weird and wonderful places. And I certainly hadn’t realised that I’d have given my black leather longcoat to my son.”

Danie lives way way over in Brexit land but she donated an item to the twitter auction to raise money for the Australian firefighting effort.

I am a novice card maker but I made the pictured card. This is a thank you to Danie Ware for appearing as a guest on Dark Matter Zine and for supporting Australia’s firefighters. 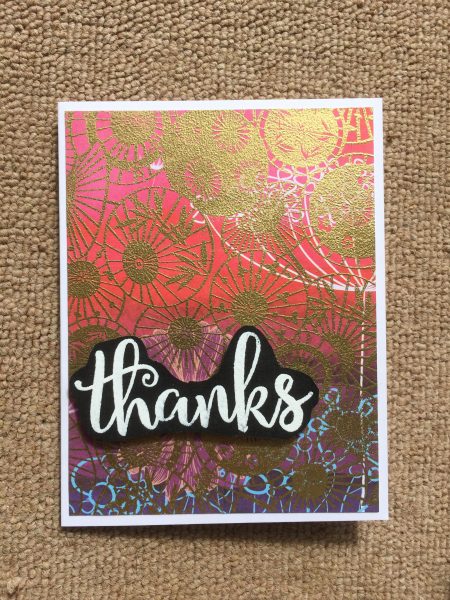 I’m not sure what inspired me to make this card specifically for Danie other than PRETTY SUPPLIES. I’d just received a Japanese-themed card-making kit with all sorts of goodies that I still haven’t used NEARLY enough.

I’ve seen loads of cards where people stamp a textured image onto cardstock that has a pattern already so I decided to give it a try. I used an anti-static tool, versamark invisible ink then gold embossing powder that I melted with my heat tool. Although I love the colors in the card I think the designs of the card vs the stamp clash so I was a little disappointed. I’ll try this again with different colored paper another time, looking for more subtle color variation.

Because I am still stuck with my Tim Holtz stamping platform that doesn’t cope with large rubber stamps (it presses too hard in some places, not at all in others) I placed the stamp on the paper on my media mat and pressed. Or I put the paper on the stamp. I can’t remember which way round I did it now. Anyway, there was one little spot that didn’t get any gold embossing. I was sad. The sentiment – heat embossed with white powder on black cardstock then cut out by hand – covers this flaw up. And the stamped image was way bigger than this card, so I trimmed it down and kept the scraps to decorate another card later.

There are times I feel a real fool while making cards, especially when I compare my efforts to those whose blogs I visit and youtube channels I watch to learn from. And yet I’ve always loved creating art and craft. Even sitting here right now, typing up a brief version of what I did, is far more relaxing than being on Twitter right now. Although I’m in the middle of reading Helena Fox’s How It Feels To Float in preparation for another podcast; finishing that novel is my next non-twitter non-stressful-media-reading thing to do. And it also dates this post – you’ll be able to roughly ballpark when I wrote this as opposed to when it gets published.

Find something that makes you happy, a thing that helps you deal with the stress and do it. Do it even if you have ups and downs. Try not to compare yourself to others or – if you do – look at what they did years ago to encourage you that, with practice, you will improve too. My eyesight is deteriorating so getting back into art and craft at this time seems silly, it seems like a waste of money, but it makes me happy. When my mother-in-law was dying of cancer, one of her regrets was that a nasty adult education teacher put her off ever doing art again. Don’t be like my MIL, learn from her regret. Do the thing that makes you happy.