Professor Alan Beck groaned as he stood, stretching his aching muscles, feeling the sweat sliding down his back. At his age he should have been ensconced behind a desk in an air-conditioned office but the powers that be, intent on a changing of the guard, designated him the babysitter for the junior students’ archaeological expedition.

There was something distinctly off about this dig site, located on the border between the dry, sandy valley of the pyramids and the lush farmland lining the Nile. The students were digging in with the careless enthusiasm of a first expedition.

Gazing around at the dig site marked with yellow tape in a grid pattern, Alan noticed a cluster of students had migrated to one corner of the dig, out of their designated digging areas. Sighing, he headed towards them, intent on calling them to order before lunch.

Walking towards the students, Alan called, “Hey ya, hey ya,” as if gentling a horse. “What’s going on here?”

“Prof! Look at this,” Jo called in a higher-than- usual voice, waving a fragment of pottery. 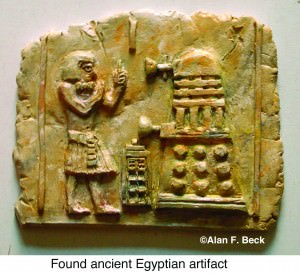 Alan arrived at the group, accepting the fragment of pottery before bursting into laughter. “Which of you made this?” He asked in an unsteady voice.

“None of us,” and “No-one,” came the protestations of innocence.

“Ken?” Alan asked in a knowing tone: Ken was the class clown. Every class had at least one, and Ken was more than enough clown for two classes.

“Sir? NO,” Ken replied, injured innocence dripping from his pores along with sweat in the midday sun.

Alan shook his head, still smiling, as the class professor – every class has a student who takes that role too – stepped forward to point out the fine details of the pottery that implied the ancient origin of the fragment. Only partially listening, still chuckling, Alan turned the fragment over in his hands. For a student prank, this was an excellent forgery. Actually, the quality of this forgery was – it was too good for a student prank.

Alarm bells started going off in Alan’s head. Did he have enemies who wanted him gone so badly they’d discredit him in his twilight years? Surely not, that would potentially discredit a lifetime of research that brought the university funding, helping to build a solid academic reputation.

Someone else then… It really was a VERY good forgery… No… it couldn’t be genuine, could it? Oh my god, no… That guy, that Chariots of the Gods guy… von Däniken, he couldn’t possibly be right, could he? He was such a joke…

Alan came to a decision, squaring his shoulders and looking up at the assembled dtudents. “This is an excellent forgery but a forgery nonetheless. Someone has gone to great lengths to call into question the competence of this expedition. We can’t let this challenge go unanswered. A bottle of the best Scotch goes to the student who finds scientific evidence proving a forgery. A case of the best Scotch if you find who did it
and how.”

Unnoticed, telescopic vision trained on the cluster at the dig site. A superior intellect swivelled 180 degrees precisely, before retreating down the darkened corridor, allowing the sandstone-camouflaged door to close, blocking all evidence of extra-terrestrial life.

‘Found ancient Egyptian artifact’ (image used with permission) by Hugo Award-nominated artist Alan F. Beck, after whom Nalini named the professor in the story in recognition for her source of inspiration.