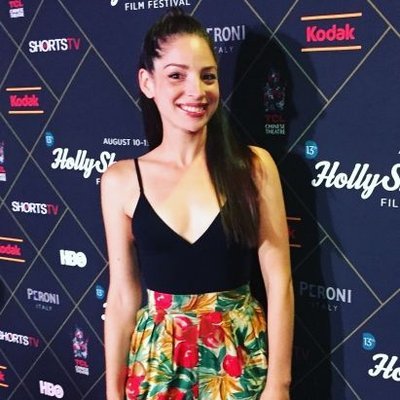 In this podcast Nalini talks to actor, screenwriter and director Anna Hopkins. Anna is famous for her 3 roles as a journalist on Defiant, The Expanse and now in the horror short V/H/S/94, launching today on Shudder. She also won an award for her role as the villain Lilith on Shadowhunters, a role Anna relishes.

According to IMDB, public funding bodies such as the Canada Council for the Arts and Bell Media’s Bravofact!, and film festivals such as Austin Film Festival, Nashville Film Festival, Cinequest, and St.John’s International Women’s Film Festival recognized and funded Anna’s work.

Note: Anna Hopkins is on the TV series not in the books

. I compare the two here.

As is my usual practice, I cyberstalked Anna a little before our interview. We were only allowed 15 minutes to talk so I didn’t follow my notes specifically but I did try to cover all the below. Our conversation wove around, building a beautiful picture of Anna Hopkins the actor, creatively diverse person, and fan girl. I hope she remembers my offer and returns for a longer conversation next time she’s launching a project.

Anyway, here are my notes:

Journalist roles and working with a woman director

Did your prior journalist roles help you with this horror movie?
Is working with a woman director different? Did that impact you as an actor and as a director yourself?

You directed the short Dust film “Give and Take”.
What was that like?
Did it present any specific challenges?
Did you write it?

You’re Monica Stuart in the Expanse. Her role changes over time from almost-villain to one of the good guys (good-ish?) Did your character’s evolution give you insights for your own writing and directing?

On Instagram you have a photo of yourself with Patrick Stewart; it looks like you’re attending a pop culture expo and had your photo taken. Is that the case?

Do you attend pop culture expos now?
What is it like having seen these expos from both sides?

Thank you for joining Anna Hopkins and I for this discussion. I hope you enjoyed it. Please watch this space for future interviews, which will also be available on a few dozen podcast platforms. Stay safe!