Animal Life is touted to be in a similar vein as The Animals In That Country. I disagree. As I loathed the latter, this is a good thing.

I have pondered this novel and yet struggle to start describing it, so I’ll quote the publisher.

In the days leading up to Christmas, Dómhildur delivers her 1,922nd baby. Beginnings and endings are her family trade; she comes from a long line of midwives on her mother’s side and a long line of undertakers on her father’s. She even lives in the apartment that she inherited from her grandaunt, a midwife with a unique reputation for her unconventional methods.

As a terrible storm races towards Reykjavik, Dómhildur discovers decades worth of letters and manuscripts hidden amongst her grandaunt’s clutter. Fielding calls from her anxious meteorologist sister and visits from her curious new neighbour, Dómhildur escapes into her grandaunt’s archive and discovers strange and beautiful reflections on birth, death and human nature.

For even in the depths of an Icelandic winter, new life will find a way.

Animal Life is philosophical, poetic and literary with a capital “L”. Throughout its pages, the author uses Literary devices to ponder the meaning of life, death and the time between while observing extinction events. Olafsdottir’s narrative examines three unfinished manuscripts awaiting publication, leaving the reader wondering if Animal Life incorporates similar works.

Grandaunt’s rambling storytelling and meandering arguments reflect in this first person narrative by her grandniece, Dómhildur.

Dómhildur is a midwife, the daughter of two undertakers, from a line of midwives in Iceland. She appears to have autism or to be depressed while climbing out of a personal stasis into the new year.

The Animals In That Country, in contrast, uses a standard story arc and hero’s journey to strip a character of everything, leaving her with nothing and no one at journey’s end.

Animal Life is challenging, exploring philosophy and symbolism. The Animals In That Country started well but finished shockingly void.

I read too little Literature to explicitly analyse Animal Life. Contemporary poetry eludes me. However, I believe readers who enjoy philosophy, who loved Shadow of the Wind, and who enjoy poetry will adore this novel.

Also – an afterthought – I suspect those who love 19th century literature will probably relish Animal Life. Some passages reminded me of the book version of Larks Rise to Candleford that I read when I was about 20, well before the movie was a twinkle in a producer’s eye. And, on that train of thought, Sons and Lovers comes to mind. Mostly as a reflection on the style of writing alongside with authors wrestling with the human condition. 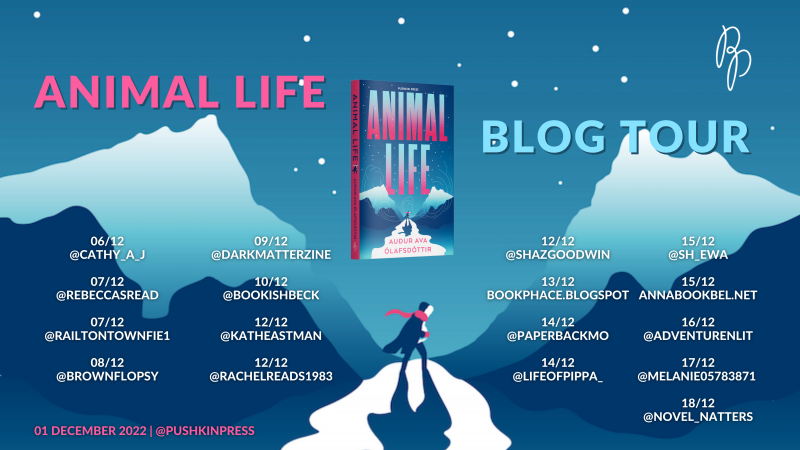