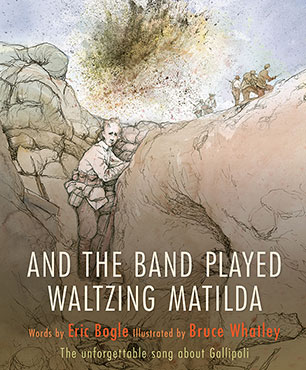 Australians might remember the song from the 1980s, played by the Bushwackers folk band I think. And the Band Played Waltzing Matilda is like Good Morning Vietnam. Except without the comedy. And it’s Australian to its core. And it’s a song.

The picture book captures the essence of the song, illustrating it verse by verse. Including the corpses and blood.

In the book, the central character believes “there’s worse things than dying” because he loses his legs. “They gathered the crippled, the wounded and lame… [I] thanked Christ there was nobody waiting for me to grieve to mourn and to pity…”

Back in the 1980s I was consciously ashamed of having a disability. I thought it was the appropriate way to feel about being disabled. I believed the only appropriate response was to conceal and to strive to cope without assistance if at all possible. So, back then, I thought the words of the song were tragic, poignant and appropriately shaming of the victims.

Now I’m horrified this could be a children’s picture book.

I look at this book now and I see the zombie apocalypse. Seriously. The front cover shows a soldier in a trench at Suva and the first thing I saw, even before I opened the book, was “zombie!”

I’m not even into zombies.

But now I’m re-imagining Gallipoli as the zombie apocalypse with the Turks double-tapping in self-defense. And, when you think about the British muckety-mucks ordering Aussie Diggers to their deaths, it’s not a bad take on the situation. For a dramatic portrayal of Gallipoli, see the movie by the same name starring a very young Mel Gibson. I was force-fed that movie at least once a year as part of my high school curriculum.

Australians lost that battle. The cavalier attitude of British officers ordering Aussie Diggers to their deaths may have helped turn Australia away from Britain as the Mother Country, increasing Australia’s independence as she slowly untied the apron strings.

Eric Bogle’s author’s note is poignant, talking about Vietnam, wanting to protest the futility of war but choosing Gallipoli because it’s so ingrained into our culture. And the Band Played Waltzing Matilda is far more effective because it focuses on Gallipoli; if it had been another Vietnam song it would have been lost in the noise.

I’d recommend And the Band Played Waltzing Matilda to high school students, especially those aspiring to join the military cadet corps. Read this instead of seeing Gallipoli for the 4th time in 4 years. This book could be helpful in explaining the Anzac march to children or explaining post-traumatic stress disorder in a relative returned from fighting in the Middle East.

Be careful to balance the negative messages about disability, though. What And the Band Played Waltzing Matilda says about disability shocked me because I’d forgotten. I felt like someone grabbed my heart and SQUEEZED. I gasped for breath.

Don’t shame the victims. Shame those who, in this case, send them to be cannon fodder.