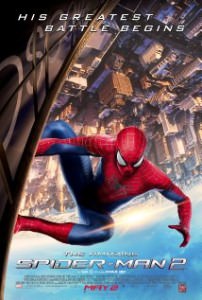 The Amazing Spiderman 2 has 8 stars on IMDB from 6,468 users. This re-reboot of a classic seems to be a hit with fans for a combination of its fannish references and its special effects including LOTS of ‘splodey-style action.

Take note! There will be fan reviews listing reams of references from the original comics by Stan Lee, the Saturday morning cartoons – I lost count of the number of times they used the theme music – the Matrix, Bladerunner and many many more nods to pop culture icons. The Amazing Spiderman 2 seemed intent on referencing the Toby Maguire Spiderman movies with William Daefoe‘s (the Green Goblin’s) image thrown up on the screen several times although, according to IMDB, Daefoe doesn’t seem to have been given a credit in either Amazing Spiderman movie.

There was the usual cameo by Stan Lee and, if I’m not mistaken, Peter David also had a brief moment on screen. Peter David is a long-time and beloved comic book author whose work in science fiction and fantasy has earnt him the respect of his peers. I could be mistaken about Peter David though.

Storytelling, plot and believable characters were not a strength of the Amazing Spiderman 2. Writers appeared to be throwing as many references to the comics and the Spiderman movies as possible without asking why story and character transitions took place.

Why did Max Dillon go from man-crush to hating on Spidey? Just because Spidey hadn’t been in touch? If Max’s issue was mental illness then that made two-for-two: both villains were mentally ill. Alongside the Bechdel Test fail – no women talked to each other independently – the Amazing Spiderman 2 is clearly a white guy movie.

The Amazing Spiderman 2 has a colander for a plot, poorly plugged with lots of webby action.

But the action was great, the special effects well-done and the 3D suited the action rather than overpowering the characters. No annoying lens flares in Spidey movies, thank the director! For an SFX blockbuster extravaganza, I couldn’t go past the large-screen IMAX experience.

I would have liked to see a gymnast in the Spidey suit rather than just a CGI suit though – the form and the admirable moves would have added to the visual feast rather than seeing what appears to be an empty rubber suit doing all the things.

When it comes to Spidey battling the bad guys, the Amazing Spiderman 2 has all the toys! Action, explosions, impossible stunts, you name it. At the end there are some new bad guys in mechanical suits providing excuses for fun fight scenes; this seems to be a lead-in to the next Spidey movie, which has been announced.

On a scale of comic book movies from 1 to 5 stars, I put Daredevil and Electra at two stars, Iron Man 3 gets 3 1/2 stars, Iron Man and Captain America get 4 stars and Thor 1 & 2 get 4 1/2 stars. In that context, I give the Amazing Spiderman 2 3 stars because it either needs to be shorter or the story needs work.