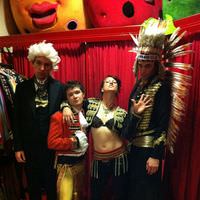 It was the night after Amanda Palmer and the Grand Theft Orchestra opened at Northcote Social Club, running a series of gigs that were performance but also development of their new music; the performances themselves were a means of preparing for recording their first album together. We met at the venue; due to sound levels in the bar, the interview took place in their dressing room.
One might imagine that a musician the calibre and renown of Amanda Palmer would have a lovely, spacious dressing room, possibly with professional interior decorating or decorated with trending music-related posters and art. Reality is somewhat different. I entered a rectangular room the size of a small bedroom, with a high ceiling and gloomy dark brown walls, contrasting with the lighter plasterwork underneath where the walls were chipped. A bar fridge sat in the right corner near the door, past which I was confronted by a coffee table covered in working papers, a laptop, discarded remains of the band’s rushed dinner. 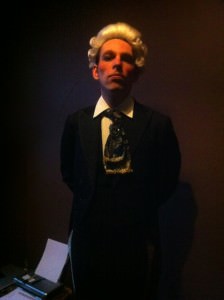 Amanda stood behind the coffee table to greet us before apologising for the lack of chairs and sitting down in the far right corner on a couch. Amanda wore layered clothes in shades of black and grey, including her customary sleeves and eyebrows; rushed, Amanda had not begun to dress for the performance. The Grand Theft Orchestra filed in greeting us, walking straight from the door up the left side of the room. Jherek Bischoff, the bassist, sat in the far left corner, mostly concealed in shadows, silhouetted by the window.  Michael Mcquilken, the drummer, was striking: I looked up at him so he’s a bit over 6 foot tall, dark hair, almost ready for the performance already with eyeshadow, darkened cheeks, the darkened outline of his lips smudged into lighter, almost natural coloured lipstick (I remember doing my lips like that, way back when!), black trousers and a gold medallion. Michael’s hairy chest caused Amanda to joke during the performance that he was not wearing fur. 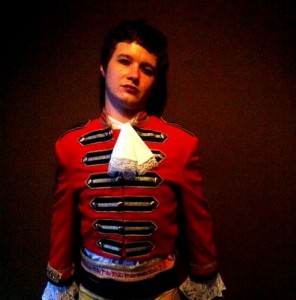 Chad Raines is average in height (read: a little shorter than me, standing at about 6 foot in my sandals) with boy-next-door good looks, mid brown hair and a friendly, open face, wearing casual day clothes. Michael and Chad sat on the couch along the left wall as I moved a bag to sit cross-legged between the fridge and the coffee table, enabling me to see Amanda to my right, Jherek in front, and Michael and Chad to my left. Edward sat on the floor in front of the fridge. 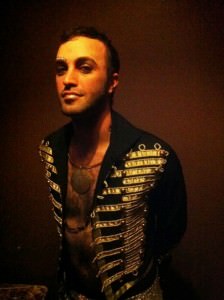 Amanda sounded a bit husky, explaining how she’d lost her voice the day before. Other misfortune had befallen them as they’d had technical difficulties, delays… all in all, it had not been a good day for them, and now they were behind schedule. They still made time to speak to Dark Matter, however…

Nalini: Thank you for agreeing to talk to Dark Matter. Can you please give me names, ranks and serial numbers: who you are, what you’ve been doing lately, and who you are influenced by. Let’s start with you Amanda. 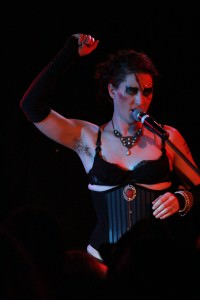 Nalini: Who have you been influenced by?

Amanda: Who have I been influenced by? Judy Blume, Nick Cave, Dr Seuss…

My eyebrows attempted to climb into my hair while I had visions of Amanda Fucking Palmer, a la Dr Seuss drawing style, dancing across the pages of Dr Seuss novels with Sam-I-Am and being tempted to eat green eggs and ham. Oddly enough, Amanda suited the artwork in my head.

Jherek: Jherek Bischoff. I think my main influences would be Arvo Parts, John Jacob Niles. I’ll leave it at that.

Michael: My name is Michael Mcquilken. I played drums in Amanda’s band. I’ve also been doing some directing for her Polly video http://www.youtube.com/watch?v=lg0dWANc3mo. I’m going to be directing her touring stage show later this year and next year. I guess I’m mostly influenced by Stevie Wonder as a musician and Kubrick and Lynch as a filmmaker.

Chad: Chad Raines. I also graduated with Michael from drama school. I did sound design. I write a lot of music for theatre. My things right now are a lot of Residents and a lot of music by Gorilla vs Bear and that’s about the gist of it.

Nalini: So are you guys, Michael and Chad, responsible for the visuals for Polly?

[WARNING: I’D GUESS THIS VIDEO WOULD BE RATED AT LEAST M]

Michael: For Polly, yeah. I worked with a dear friend who is a cinematographer, whose name is Sarah Lasley. We all met at Yale university where we went to school. That was a very quick project, a one-day project. Well, one day of shooting and about six days of editing.

Michael: Chad did all the scouting. We hired a couple of Yale actors to be in it. It was Amanda’s treatment: she came up with the storyline and we shot it in a day and then I did all the postproduction work.

Amanda: Michael and I originally – when we originally got together to talk about working together, we were going to do some kind of theatre collaboration. When I first saw him I knew he was a musician but I saw him as, like, a theatre creator. And so –

Michael: In the Edinburgh Fringe Festival –

Amanda: In Edinburgh, three, four years ago. And it also happens that he’s drumming. But what happens in my world a lot is that everybody wears a lot of hats. It’s going to be happening on this tour a tonne. Not just instrument-wise, like these guys all play a lot of instruments and they range and they’ll be helping with volunteer musicians and stuff. Everyone will be doing a lot of different jobs. It keeps it exciting.

Nalini: So Amanda and Michael met in Edinburgh. How did you guys meet?

Amanda: These guys [Michael and Chad] were in Jason Webberly’s touring band together.

Michael: Yeah. What, nine years we’ve known each other? Nine or ten years?

Michael: We met at university

Chad: So we played a couple of shows together last summer to test it out. Things have been going pretty good.

Nalini: So how did the Grand Theft Orchestra actually come about?

Amanda: I needed a band.

Nalini: So you just got on the phone?

Nalini: You’re really into telling stories with your music: how’s that developed?

Amanda: I think, weirdly, I’m getting more literal which I’m not sure is a good thing or a bad thing, but I’ve noticed it’s definitely happened.

Nalini: How recently is that?

Amanda: After I made my first solo record I started writing super-fucking-literal songs on the ukulele. I’m actually – I’m trying to force myself to get out of that habit, to go back to being more of a poetic songwriter because I’m good at that too. But I don’t know, it’s sort of – I think it’s like a pendulum: you get sick of being really vague and poetic and you swing literal and then you swing back.

Nalini: And what about everybody else? How has your storytelling developed?

Chad: I just like to make fantastics and pot beats. I just think of the things that I love to scream out in a room full of people and to say them and not care about what the fuck they mean. It’s a different aesthetic, you know. People who are really into storytelling, probably aren’t into the stuff I like to do. But people who like to freak out and have a good time, that’s what I’m about.

Nalini: You seem to talk a lot about social issues in your music: is that deliberate?

Amanda: is that true?

Nalini: The ukulele anthem. There are so many of your songs, you’re telling a story, and so many of the stories are about social issues.

Amanda: I think that happens by accident. I mean, I think you write about the things you care about or, in my case, the things that are bothering me or making me angry. Sometimes it’s something personal and sometimes it’s something larger than personal, but I’ve never really considered myself political. I think the more directly political you are, sometimes the less effective you are. I think by making more personal statements you can usually affect a bigger emotional change in people which actually does affect change, versus saying ‘here’s my song about who to fucking vote for’ which actually doesn’t really impact anybody at all.

Chad: It’s like an afterthought almost. The politics of it, it’s like a result of what you care about.

Chad: I just want to contribute. Chad Raines said that.

Nalini: Have you ever felt pressured to conform to gender-based expectations of behaviour?

Amanda: Since I was born.

Nalini: Has your public persona been a reaction against that or do you think that’s –

Amanda: I think that’s too strong to say. I don’t think the public persona has been a reaction. I’m not anti- anything; I’m mostly just anti- being told what to do, and that means I can manifest in any way that I feel like at that moment. I think you can get yourself stuck in just as tight a box by being against X. I think it’s very interesting being a woman especially being a woman/musician/performer because you know whether you do it or you don’t do it, you are still doing something very specific. If you’re not glamming it and sexing it up, then you’re very deliberately not glamming it and sexing it up and it’s just as bold a statement. So my approach to that is to do a little bit of both, and to feel comfortable. The minute I feel uncomfortable – like, literally, physically, uncomfortable – I feel like I’m selling out. So I will not wear uncomfortable shoes.

Nalini: Good for you!

Amanda: Anything that hurts or takes too much time I am not a fucking fan of. That pretty much sums up my entire stage. And with that, we have about an hour and a half to get ready.

Nalini: Thank you for talking to Dark Matter.

We filed out, Amanda, the band and the band’s manager, Eric Sussman, trooping downstairs to thank the fans who provided them with nachos for dinner before getting ready for the performance. About an hour later, Amanda was her own opening act as the woman who was going to open was unable to make it. Although Amanda had been nursing her voice and was sounding somewhat better onstage, she was still not her usual self at the beginning of this performance. It amazed me how she managed to not only perform for a few hours that night, she opened for herself, sang with the band, stayed on stage while the band had a break, sang with the band again and, if anything, her voice sounded better as she sang throughout the evening. Although concerned about the consequences of pushing herself when not at full health, I thoroughly enjoyed Amanda’s performance, appreciating her professionalism.

Amanda asked people not to put clips of the music from these performances on YouTube as the music is in a development stage and will change before it is recorded in their new album.

Later, while dealing with administrative issues, for the sake of marital bliss I commented to Eric, the band manager via email: My husband has complained repeatedly because I didn’t ask the Grand Theft Orchestra if they boost instruments. [It’s hubby’s sense of humour, but I love him anyway.]

Eric (the manager): Does “boost” mean “steal”? My Aussie lingo dictionary is still pretty slim. If so…. nope. Not yet. The band has never purposefully stolen any instruments to my knowledge. BUT Amanda (and the band) – we frequently use Twitter to crowd surf instruments, or instrument players when we need them but don’t have them. I guess we “borrow”. We’ve used twitter to procure keyboards, ukuleles, sewing kits, rides from Sydney to Newcastle, make-up, a bagpipe player. You name it – chances are we’ve asked!