A guest blog by Amanda Bridgeman

With the recent news of a new Alien film coming our way courtesy of Neill Blomkamp, it’s been amazing to see just how excited everyone is about the forthcoming film. It made me stop and think about why this franchise has been so popular and stood the test of time, while many others have fallen away. Generally, what makes a film great is the overall package – it is a culmination of good writing, directors, cast, special effects, cinematography, etc. But I believe the number one reason any film franchise really takes off is because of the characters. They are the ones that get the audience into those cinema seats. It is the characters the fans become loyal to and want to follow on their latest adventures or support in their latest battles. So, when looking at the Alien series, it’s clear to see why this franchise has been so popular. Her name is Ellen Ripley, and she is the greatest heroine of all time. Ripley, after all these years, still tops the lists today as being a favourite among fans. Why? Because she was built to last on a foundation of good characteristics; a heroine who earned the audience’s respect through her courage and her intelligence, not her body or her feminie wiles. So I thought I’d take a closer look at just what it is that makes her so successful a character. I present to you The Anatomy of a Heroine.

Ellen Ripley: The Anatomy of a Heroine 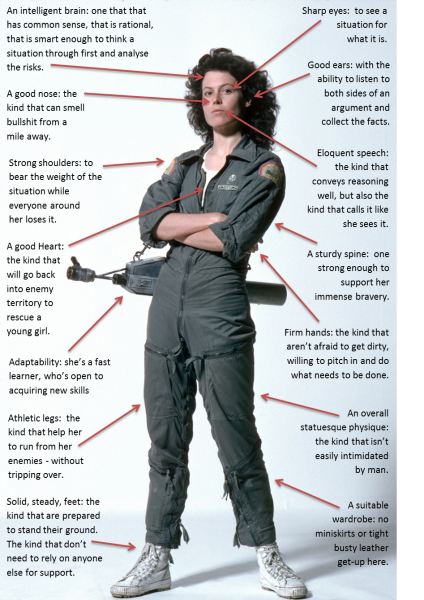 To me Ellen Ripley is the greatest heroine because she is the perfect mix of the three B’s. She has the brains, she has a little bit of brawn — but not so much that she loses her femininity — and she has beauty (inside and out), without being too pretty in that an audience can’t take her seriously (or alternatively too ugly or boyish because some believe that’s the only way a chick can be tough). She is a superb, balanced blend of a strong female character.

So when I heard she was coming back to the big screen, my reaction was a big HELL YEAH! Bring it on! I could watch Ripley for an eternity. And I hope the young girls of today get to do the same.

Born and raised in the seaside/country town of Geraldton, Western Australia, Amanda hails from fishing and farming stock. The youngest of four children, her three brothers raised her on a diet of Rocky, Rambo, Muhammad Ali and AC/DC. Naturally, she grew up somewhat of a tomboy, preferring to watch action/sci-fi films over the standard rom-com, and liking her music rock hard. But that said, she can swoon with the best of them.

She lived in ‘Gero’ for 17 years, before moving to Perth (WA) to pursue her dreams and study film & television/creative writing at Murdoch University (BA Communication Studies). Perth has been her home ever since, aside from a nineteen month stint in London (England).

She has so far released three books in the Aurora series – Aurora: Darwin, Aurora: Pegasus, and Aurora: Meridian – which has recently been nominated for an Aurealis Award for Best Science Fiction Novel. The fourth book in the series, Aurora:  Centralis will be released this month.

You can find Amanda