Princess Amora turns 18 so faces a rite of passage where she must publicly kill a prisoner with magic. She does it at night, usually in secret as “benevolent” rulers do, and uses teeth, hence “all the stars and teeth”.  Anyhoo, all the stars and teeth don’t save her, her magic gets out of control. She tortures the poor man to death then faces execution herself.

Bastian, a pirate who just happens to be around, just happens to access the deepest darkest dungeon for the most dangerous criminals on an impulse to save the princess. Without any magic or a plan, he helps Amora escape. As you do.

They fall in love while traveling in Bastian’s magical ship that he pilots magically while having no magic.

Their quest: to prove Amora is worthy to rule the kingdom. Gradually this quest evolves. And they expose secrets.

I can’t help but think that Bastian is supposed to be disabled because his brother stole his magic. However, this kingdom has many kinds of magic that allow people to perform different tasks. Bastian has a magical ability to pilot his ship so he doesn’t seem disabled at all.

During the climax Amora shatters her knee. Then, through sheer strength of will and no magic, she keeps walking, climbing stairs and fighting, all the while using her shattered knee. The message is clear: disabled people, just have more willpower! You can do it!

Give me a bucket.

I’ve had people tell me to “hold that book further away, you can do it” and “you’re faking”. Oh, and another beauty: “have enough faith and God will heal your eyes”. Get in the bin.

At the end of one scene I was absolutely convinced the “happy couple” had sex. Grace did not describe the sex only them getting hot and heavy. Then the scene ended without them parting ways prior to coitus. However, a later scene appeared to imply that they’d had coitus interruptus or self-restraint although it seemed clear that Amora has had multiple sexual partners previously. Unless I misunderstood that too. I enjoyed the liberated princess contrasting with her uptight rejected betrothed.

That passionate scene read as if the author wrote a sex scene then, during editing, she toned it down to appeal to a specific market. The specific market that polices school libraries and high school students’ reading materials. That’s my theory anyway.

Another theory: I know another author was told to insert a kiss in book 1 of a trilogy. I always felt that kiss jarred, it was premature for the couple. I’m wondering if Grace’s editor told her that jumping into bed was too soon.

This is just conjecture. Musings… Questions to which I’d love the answer. Perhaps I’m too used to interviewing authors?

All the Stars and Teeth melds romance adventure, adventure romance, and soap opera genres. I’m usually not a fan of melodrama, especially when it gets all talky. And reminds me of my brief foray into daytime soaps… where they spend an awful lot of time (pages) telling you about a feeling. I’m more of a West Wing fan where dialogue and narrative is short and snappy. However, Sarah J Maas fans are legion so I am in the minority.

All the Stars and Teeth is not my cup of coffee. It’s more a cup of tea, well brewed, with milk and cheesy biscuits on the side. Especially when you get to the climax, where I was convinced key magical rules proved inconsistent. However, this story has action, adventure, a princess trying to be feminist who is then bound to a man against her will (cue sequel), romance…

The adventure is fun, an homage to myths and fantasy novels of yore.

I recommend All the Stars and Teeth for fans and stans of Sarah J Maas. 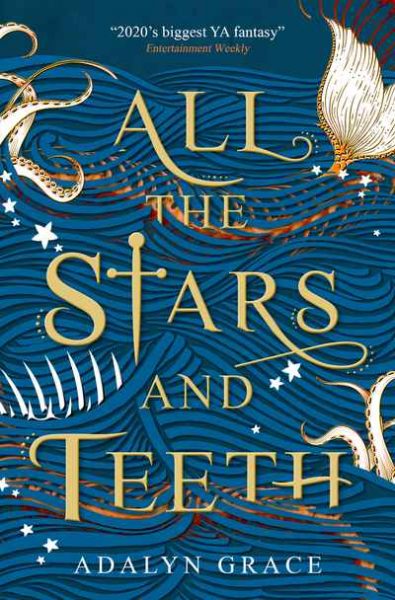