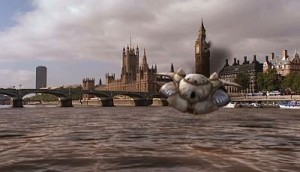 The Doctor (Eccleston) and Rose (Piper) have jaunted off to see the end of the world before visiting Charles Dickens in 1869. Now they’ve returned to the London of Rose’s era to visit her mum.

Rose asks the Doctor how long they’ve been gone; he replies “about 12 hours”.

Yeah, right. Because the Doctor is sooo reliable in these matters.

Rose races off into the housing tenement where she lives with her mum. Meanwhile, the Doctor notices a flyer calling for people who’ve seen Rose to contact the police because she’s been missing for 12 MONTHS.

After the family drama, a spaceship crash-lands, swiping Big Ben on the way through. Police barricades prevent the Doctor and Rose getting closer so the Doctor experiences first contact with aliens via the television, like the rest of us mere mortals. He’s not overly happy about this; queue traditional male/female television conflict. Priceless.

An alien corpse is found in the spaceship and taken to a hospital for a postmortem, introducing Toshiko Sato (Naoko Mori) who later joins the Torchwood team. Tosh starts her investigation before storing the body in locker 5.

As soon as we saw the body going into locker 5, the minion said, “Number 5 is alive!”

Harriet Jones, MP, Flydale North, manages her way into highly confidential files and witnesses murder most foul but, in the spirit of family viewing, the murder is left to your imagination.

This episode ends on a cliffhanger with the Aliens of London having revealed themselves.

Although I love Christopher Eccelston – he’s possibly my favorite doctor – on my first viewing I found Rose’s attachment to her family disappointing. Classic Who rescued companions either from bad situations or boredom, whisking them away to expand their horizons and fight for the underdog everywhere. I found New Who’s focus on family attachments disappointing the first time round.

Now, however, I quite like this new focus: in real life most people have to balance responsibilities against desires and dreams, including family ties.

For the first time in Doctor Who we see the devastated family left behind after a companion runs off with the Doctor without so much as leaving a note. This adds a darker note to family viewing: more context, more social comment.

This review, like the episode itself, ends on a bit of a cliffhanger. However, I’ll give you a rating: ★★★★☆ 4/5 stars