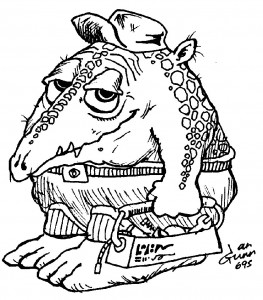 The sleepy smile on this alien repairman says it all. Although he looks a bit like some repair guys I’ve seen, his trousers are firmly held up with a belt. I’m hoping we don’t get to see his ‘money box’ when he bends over.

Ian Gunn, creator of Alien Mowing, was a much-loved award-winning artist based in Melbourne. Cancer took him from us too soon.